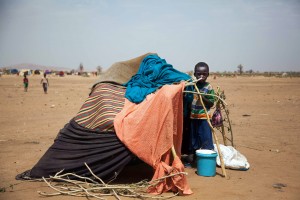 In this photo taken Sunday, March 9, 2014 and released by the United Nations African Union Mission in Darfur (UNAMID), A Sudanese child stands outside his make shift tent at the Kalma refugee camp for internally displaced people, south of the Darfur town of Nyala, Sudan. Thousands have been recently displaced following looting and destruction of a number of villages in South Darfur. At least 20, 000 have settled in refugee camps in Nyala. Women and children complain about the lack of food, water, and shelter. (AP Photo/UNAMID, Albert Gonzalez Farran)