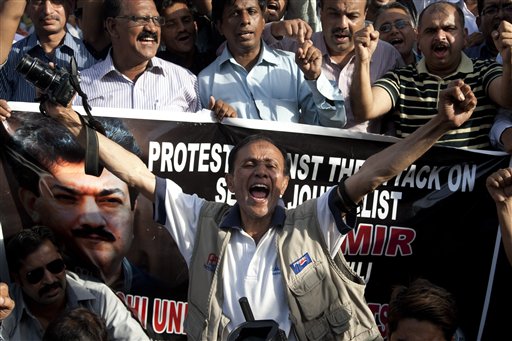 Pakistani journalists protest for their colleague Hamid Mir, who was shot and injured by gunmen in Karachi on Saturday, Monday, April 21, 2014 in Karachi, Pakistan. Police in Pakistan said gunmen shot the famous television talk show host amid a wave of attacks on journalists in the country. Police say Hamid Mir, a host on the private television broadcaster Geo, was wounded in the attack Saturday, April 19, 2014, near Karachi's airport. (AP Photo/Shakil Adil)

Pakistan’s defense ministry is calling for the shutdown of a leading television news channel after the channel broadcast allegations that an intelligence agency was responsible for an attack on a leading journalist.

Hamid Mir, a talk show anchor at privately owned Geo News channel, was shot multiple times by unidentified gunmen while he was being driven to the studio in Karachi on April 19, Voice of America reported. He is now recovering in a local hospital.

Soon after the shooting, Mir’s brother, Amir Mir, went on the television station and accused the chief of country’s Inter-Services Intelligence agency, also known as ISI, of planning an assassination attempt.

In the past, Mir has criticized the country’s armed forces and the Taliban, the Agence France-Press reported. This was not the first attempt on his life; a bomb was found attached to his car last year, the AFP reported.

Reporters Without Borders said Manid Mir told the France-based press group on April 7 that the ISI was "conspiring... to cause me harm."

The letter also accused the news channel of a "vicious campaign libelous and scandalous in nature.”

PEMRA spokesman Fakhruddin Mughal said that the authority was aware of the gravity of the issue and that “the complaint is being dealt with at the highest level,” Arab News reported.

“Rest assured, we are a neutral regulator and no matter who the complaint is from and who it is against, we will deal with the matter only as per the law and not under pressure from any organization or individual,” he said.

Mir is the second prominent news presenter to come under attack in the past month.  Columnist and TV anchor Raza Rumi survived an attack by gunmen last month in Lahore, and his driver was killed, Pakistan’s The Dawn newspaper reported.