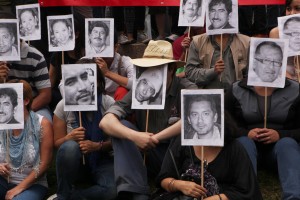 In this Sunday, Feb. 23, 2014 photo, journalists protest the murder of their colleague Gregorio Jimenez and other slain journalists in Mexico City. Gunmen kidnapped Jimenez, 42, from his home in Coatzacoalcos this month. Police found his body buried in the backyard of a home in the nearby town of Las Choapas along with a taxi driver and a union leader who was kidnapped in January. He is at least the 12th journalist slain or gone missing since 2010 in Veracruz. (AP Photo/Marco Ugarte)