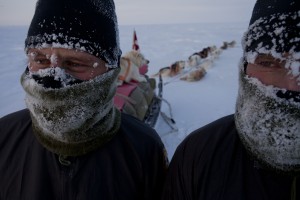 10 Mar 2011, Greenland --- Sirius Patrol Team Four, Jesper Olsen left and Rasmus Jorgensen, pause while crossing the frozen sea on the northern edge of Greenland National Park. The team was on a three-month winter patrol of the north coast of Greenland. As Greenland is under Danish reign, the patrols are meant to enforce Danish sovereignty in the arctic wilderness. The park is the largest national park in the world. This part of Greenland is an arctic desert. ---(Copyright Fritz Hoffmann/In Pictures/Corbis / APImages)