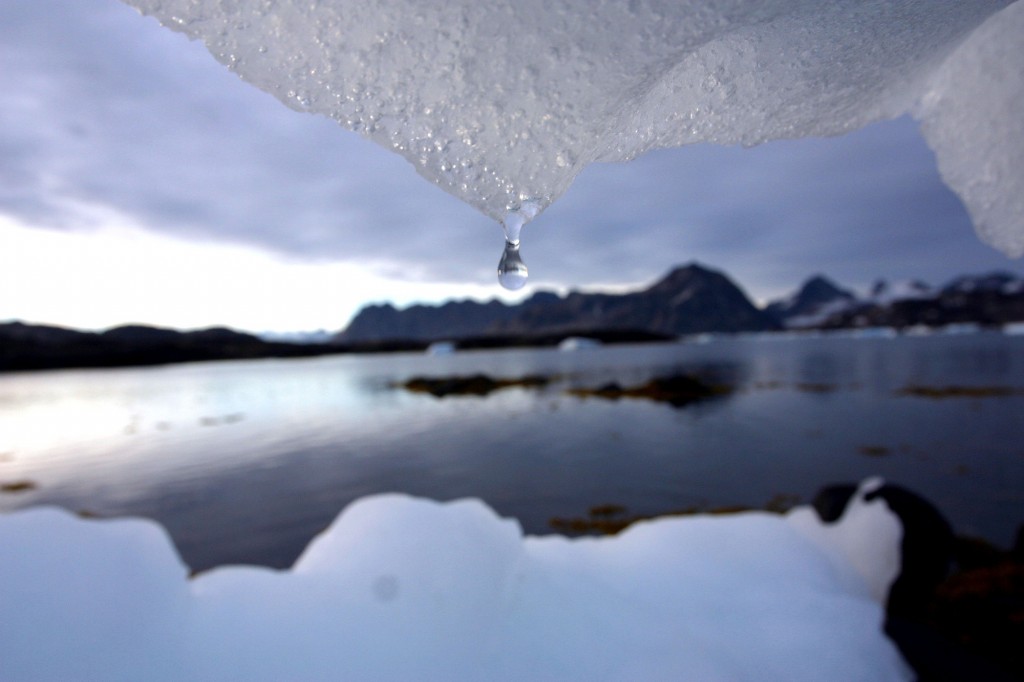 Planted in the seabed more than two and a half miles beneath the North Pole is a titanium Russian flag. Placed there in 2007 by the Russian mini submarines Mir-1 and Mir-2, the act was the most high-profile effort by Russia to stake a claim to the North Pole.

Yet Russia, which is expanding its military fleet that patrols the Arctic, is hardly alone in trying to stake a claim. Canada, Norway, the U.S. and Denmark—through its control of Greenland—are all seeking to carve out their own share of the polar region.

Driving the competition is climate change. Over the past century, Arctic air temperatures have risen by 5 degrees Celsius. That’s a major factor contributing to the decline of Arctic sea ice. Summer sea ice coverage in September was 23 percent below the average of 1979-2000, according to NASA’s Earth Observatory. Researchers predict Arctic summer sea ice may disappear almost entirely in the next 40 years. Since 2009, ships from northern Europe have begun sailing to the Pacific along the ice floes of Russia’s Arctic coast—a route previously blocked by ice.

Key to the interests of each country is the value of the Arctic’s untapped natural resources. An estimated 13 percent of the world’s undiscovered oil and 30 percent of its undiscovered natural gas lies in the region, according to the U.S. Geological Survey. Significant deposits of diamonds, gold and coal are also thought to exist.

Governing how the Arctic will be divvied up is the United Nations’ Law of the Sea Convention, signed by most every country—with the glaring exception of the U.S. Under that convention, countries can claim access to the sea area within 200 nautical miles of their mainland coasts. But they can also claim access to resources on their “continental underwater shelf,” or undersea landmass that is connected to the mainland.

It’s that rule that led Russia to send the Mir-1 and Mir-2 to plant a flag miles under the ice. The North Pole itself is a main point of contention as it sits atop the underwater Lomonosov ridge, a sub-sea mountain range that Russia claims as part of its continental shelf. Canada and Denmark also claim the ridge as part of their continental shelves, and each country has conducted Arctic research to try to support its arguments.

In this March 19, 2011 photo released by the U.S. Navy, crew members look out from the USS Connecticut, a Sea Wolf-class nuclear submarine, after it surfaced through ice in the Arctic Ocean. Photo credit: AP Photo/U.S. Navy, Cmdr. Christy Hagen

Including the Lomonosov ridge, the Arctic areas under dispute make up just 29,000 square miles, an area about the size of South Carolina. Still, no resolution is in sight. A UN commission in charge of evaluating the scientific data behind the countries’ claims may need years to consider each government’s filings—and Denmark has yet to submit its own case.

Still, given the UN commission’s limited authority to enforce any decision—the dispute may not be decided by treaty law alone. The Arctic “will end up being an issue of politics because the UN commission itself has no power,” says Ted McDorman, a law professor at Canada’s University of Victoria, who specializes in the Arctic. Any resolution could take years, given that Norway and Russia took four decades to negotiate an agreement over their claims in the Arctic’s Barents Sea.

Given the Arctic’s harsh climate, armed conflict seems unlikely. That said, nations with claims to the area are building their Arctic military capabilities. According to a recent article in the Monocle, Canada is building a new fleet of patrol ships, while Denmark’s military launched an Arctic command in 2012. Russia is adding a new amphibious assault ship to an Arctic fleet that already includes an aircraft carrier and a new special operations unit. U.S. aircraft carrier groups exercise annually in the region. Mir, the name of the flag-planting submarines, may mean “peace” in Russian. But resolving the polar dispute may mean planting fewer flags and more cooperation.