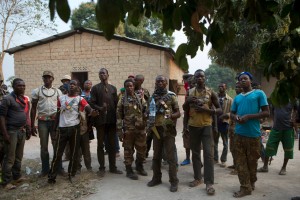 Anti-balaka militiamen stand together as they talk to journalists, in one of their bases, near Mpoko Airport in Bangui, Central African Republic, Thursday, Jan. 9, 2014. Embattled President Michel Djotodia, who has come under growing pressure to resign, was in neighboring Chad on Thursday for a summit with regional leaders who want to end the bloodshed that has left more than 1,000 dead and nearly a million people displaced. (AP Photo/Rebecca Blackwell)