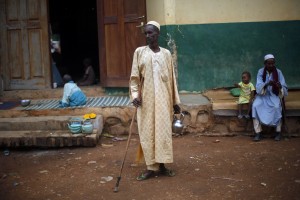 A Muslim man stands in front of the mosque at PK12, the last checkpoint at the exit of the town, in Bangui, Central African Republic, Thursday April 10, 2014. A few hundreds Muslims remain at the entrance of Bangui, waiting for transport to neighboring Chad. France is predicting that the U.N. Security Council will vote unanimously Thursday to authorize a nearly 12,000-strong U.N. peacekeeping force for Central African Republic, which has been torn by mounting violence between Christians and Muslims. (AP Photo/Jerome Delay)