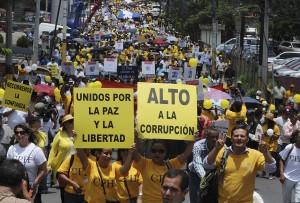 Journalists and their supporters protest violence against members of the media with signs that read in Spanish "United for peace and freedom," left, and "Stop corruption" in the capital city of Tegucigalpa, Honduras, Friday, May 25, 2012. Journalists protested the murder of Honduran radio journalist Angel Alfredo Villatoro just last week and other recent attacks on the local media. According to the Committee to Protect Journalists, CPJ, Honduras is one of the most dangerous countries in the region for journalists. (AP Photo/Fernando Antonio)