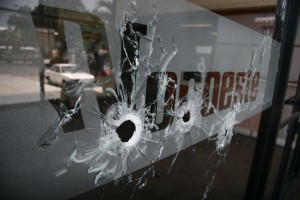 The entrance of El Noroeste newspaper is covered with bullet holes after unidentified gunmen opened fire on the newspaper's offices in the Pacific resort city of Mazatlan, Mexico, Wednesday Sept. 1, 2010. According to el Noroeste, the attack came hours after anonymous calls were made to the newspaper by a group that identified itself as "La Linea," or The Line, demanding that the daily publish stories related to the illegal activities of the Sinaloa drug cartel. (AP photo/Christiann Davis)