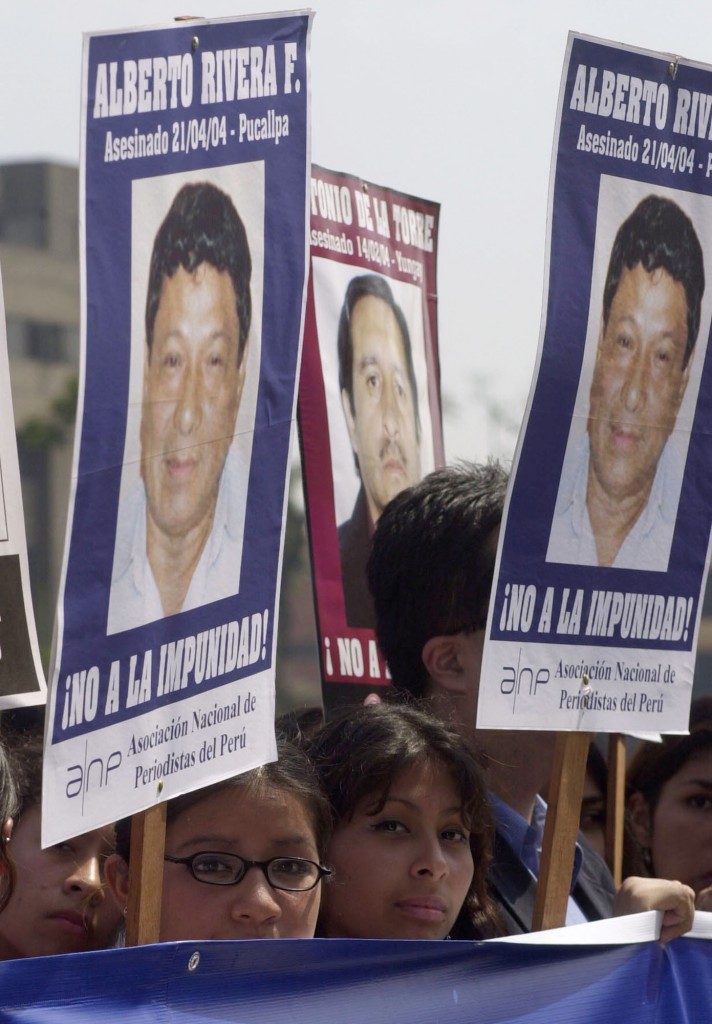 A group of journalism students march to mark World Press Freedom Day in front of the Justice Palace, in Lima, Peru, on Monday, May 3, 2004. The placards show the faces of Peruvian journalists killed in the provinces after they wrote investigative articles. "No impunity!" the signs read. (AP Photo/Martin Mejia)

A bomb exploded early April 22 outside the house of a Peruvian journalist who has been critical of local government and the sugar industry.

Yofré López Sifuentes is the founder and editor of Barranca, a biweekly newspaper and website, the Committee to Project Journalists reported. He also hosts the “Toque de Queda news program on Radio Santana in Barranca, a port city north of the Peruvian capital, Lima.

A video from a security camera showed a masked individual depositing the bomb at the entrance of López's home in Barranca at around 2:00 a.m., CPJ reported. The bomb exploded minutes later, partially destroying the journalist's home and 10 nearby houses.

Mr. López was not injured in the attack, but his parents were. He told the New York-based press group that his father, who sustained leg injuries, will not be able to walk for about a month, and that his mother had also received a few cuts.

"I thought people had broken into the house to kill us," López told reporters in Barranca. "I believe this attack is due to the journalistic work we are doing. It appears that they want to silence us."

López has often criticized Agroindustrial Paramonga, a Barranca-based sugar company, in his newspaper and on his website for “contamination, tax evasion and other violations,” according to CPJ. In 2012, he produced a documentary about the alleged environmental damage and health effects caused by the sugar company’s activity.

In response, Agroindustrial Paramonga sued López for defamation. He was cleared of the charges by a Barranca court in September 2013, CPJ said, citing local media.

López has also criticized Romel Ullilén, the mayor of Barranca, and denounced his administration for allegedly misusing public funds in municipal purchases, according to CPJ.

López is not the first sugar industry critic to come under attack. Alfredo Palacios, deputy mayor of the town Nueva Esperanza, who had also denounced industrial contamination carried out by local sugar companies, was targeted in a bomb attack several months ago, according to the Knight Center for Journalism in the Americas.

Both López and Palacios are activists with Barranca’s Land and Freedom movement, according to the Argentina Independent.

Journalists reporting on corruption and crime in Peru are frequently targets of violence, CPJ said. Assailants threw an explosive device at the home of journalist Edvan Ríos Chancha in December, though no one was injured in the attack.