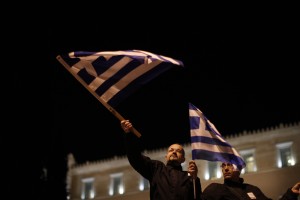 Protesters raise Greek national flags during a protest against a new austerity bill that is being discussed in the Parliament, in Athens on Sunday, March 30 2014. The measures demanded by bailout lenders will be voted on late Sunday, and would liberalize several retail sectors. They include plans to grant supermarkets permission to set up in-store pharmacies, scrap price limits on books and allow a longer shelf-life for milk.(AP Photo/Kostas Tsironis)