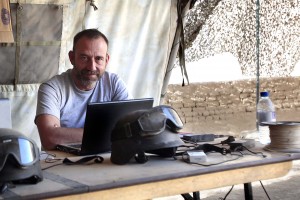 In this photo released by Spanish newspaper El Periodico de Catalunya on Sunday March 2, 2014, journalist Marc Marginedas who works for the newspaper, sits by his laptop at the Canadian base in Nakhonay, Afganistan in this photo taken on Oct. 10, 2010. Marginedas, who was kidnapped by al-Qaida-linked militants in Syria crossed the border into Turkey on Sunday March 2, 2014 his newspaper reported, as activists said government airstrikes killed at least 13 people in a northwestern border town. Veteran war correspondent Marc Marginedas was abducted on Sept. 4 near Hama by jihadists belonging to the Islamic State of Iraq and the Levant, a breakaway al-Qaida group. He was "moved repeatedly" while in captivity and was accused of spying for the West before his release, his newspaper El Periodico said. (AP Photo/Agustin Catalan, El Periodico de Catalunya)