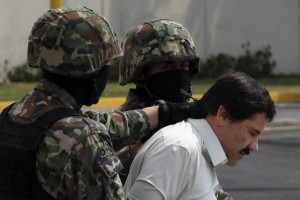 ADVANCE FOR USE SUNDAY, MARCH 2 - FILE - In this Feb. 22, 2014, file photo, Joaquin "El Chapo" Guzman, in handcuffs, is escorted to a helicopter by Mexican navy marines in Mexico City, Mexico. At least seven U.S. courts have indictments pending against him, and several are pressing for extradition. In Mexico, he faces organized-crime charges in four Mexican states and in Mexico City. He could, barring another escape, spend the rest of his life behind bars. (AP Photo/Dario Lopez-Mills)