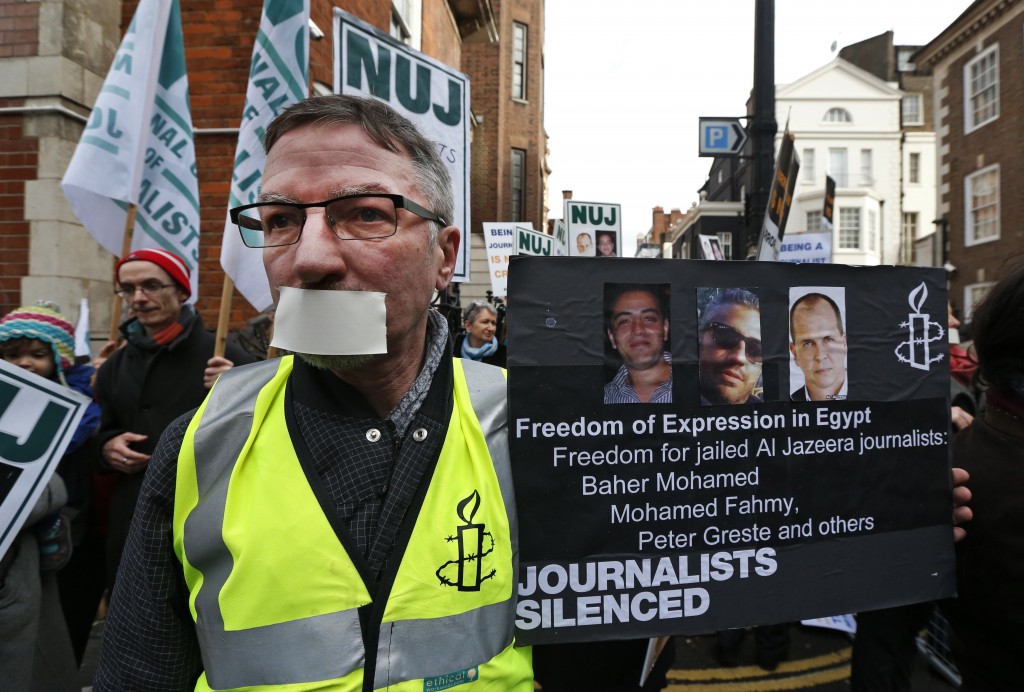 On his first day of trial in Egypt, Al Jazeera journalist Mohamed Fahmy told reporters to send the following message to his fiancé: "Tell her I love her. Big wedding when I get out.”

His wedding may have to wait: he and Al Jazeera colleagues Peter Greste and Baher Mohammed, jailed since Dec. 29, face sentences of up to seven years in prison.

The trial, which has adjourned until March 24, has garnered global coverage and focused attention on a clampdown on the press by Egypt’s transitional government. Fahmy told the court that his right shoulder “has been broken for 10 weeks and I sleep on the floor” in a cell, according to AFP.

The Al Jazeera television crew is among 20 journalists accused of joining or aiding the outlawed Muslim Brotherhood and airing false news about Egypt.

After Egypt’s military took power from a democratically-elected Islamist government in a July coup, working conditions for journalists in Egypt took a turn for the worse. At least five journalists have been killed, 45 assaulted, and more than 44 others detained, according to the Committee to Protect Journalists.

Dozens of Egyptian photojournalists take part in a demonstration to condemn violence against them and to defend their right to cover the news, in front of the Shura Council in Cairo, Egypt, March 19, 2013. Photo Credit: AP Photo/Khaled Elfiqi, Pool

All Voices And All Tones Under Morsi

Egypt has long been a tumultuous place to work for journalists. During the three decade rule of former president Hosni Mubarak, journalists were restricted in their coverage of issues like opposition groups, Mubarak’s health or government corruption. “During Mubarak’s rule, journalists could be easily targeted if they went too far,” said Hanan Solayman, the founder and editor of Mandara, a local web portal for Upper Egypt.

After Mubarak was ousted during the “Arab Spring” revolutions of 2011, many new outlets emerged, often voicing partisan views of the news. “You had all voices, all tones, all people had their ‘share on TV and media in general,” said Solayman.

While people had more choice than ever, it wasn’t always clear what the facts of an event were. Each channel was narrating the story from its political point of view, "which is known but you could never really tell what actually happened,” she said.

During the 2012 campaign for president, Islamist Mohammed Morsi vowed to defend press freedoms. “No one will touch media freedoms,” he vowed, according to Equal Times, an online news site. "There will be no pens broken, no opinions prevented, no channels or newspapers shut down in my era.”

Yet as protests against Morsi’s Muslim Brotherhood-allied government grew in late 2012, journalists covering the demonstrations were beaten and jailed—and Morsi’s government filed numerous suits against journalists for “insulting the President.”

That led to what Reporters Without Borders called a “Brotherisation” of Egypt’s media as state-controlled outlets gave the news from the Brotherhood’s point of view.

The “Brotherisation” has been replaced by a so-called “Sissification” of state media, the France-based press group says, a reference to Field Marshal Abdel-Fattah el-Sissi, the leader of the July coup that ousted Morsi’s Islamists. El-Sissi is the transitional government’s candidate for president in elections later this year.

Today, all Islamist media are banned and a "liberal" voice, one that is more secular and pro-military, dominates local media, Solayman said. She characterized the attitude of the el-Sissi administration as one of polar extremes, where "you're either with us or against us."

There are also major differences between the Mubarak era and now, she said. "During Mubarak, many journalists would not even dare or think about investigating some stories considered taboos—the urge was not there,” said Solayman. “Now there are no longer taboos, it is wide fear of the consequences.”

The case with the Al Jazeera journalists demonstrates the kinds of risk journalists routinely face. But their case is just one piece of the story. Restrictions on freedom of expression also extend to ordinary Egyptians as well as lawyers and activists. Al-Jazeera’s Peter Greste described the prisons as "overflowing with anyone who opposes or challenges the government."

Solayman said there were several cases that were "unheard of” because there has been no media coverage of them. She told of instances where offices of online “citizen journalists” were stormed by security forces. The officials destroy media equipment and arrest journalists, saying they have no license to work. Solayman said that alternative media like citizen online news outlets are targeted because they are the only means through which independent journalism is spread.

A Lebanese journalist holds a placard, to show her solidarity with detained journalists by Egyptian authorities during a sit-in, at the Martyrs square in downtown Beirut, Lebanon, Thursday, Feb. 27, 2014. Photo Credit: AP Photo/Hussein Malla

The Egyptian military’s crackdown on the press has drawn criticism from groups including the United Nations. "These are people carrying cameras, not guns," a spokesman for the U.N. human rights agency, Rupert Colville said. "Cameras seek to illuminate what is happening, not silence information by what is happening. So, it is extraordinary to find this being put into the kind of terrorist dialogue - that journalists are supporting terrorists.”

In addition to the three Al Jazeera journalists detained in December, a fourth correspondent for the network is also on trial. Abdullah Al Shamy was jailed Aug. 14 while covering a violent crackdown on Morsi supporters.

Al Jazeera is calling on the Egyptian government to release its journalists without charges. Through the campaign #FreeAJStaff, the network has collected supporting statements from communities and news organizations around the world.

Al Jazeera said it’s hopeful that “through the attention of the world’s media and partners, pressure can be brought to bear on the Egyptian authorities to hasten the release of Peter Greste, Mohammed Fahmy, Baher Mohamed and Abdullah Al Shamy by reminding them in a united voice, that journalism is not a crime."