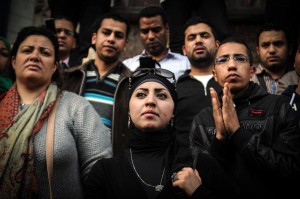 29 Mar 2014, Cairo, Egypt --- Dozens of journalists and activists, inside the lobby of the Journalists' Syndicate, on Saturday evening, to condemn the killing of Mayada Ashraf,working on liberated newspaper Doustor, during coverage of the clashes between demonstrators belonging to MB and security forces. Journalist who died amid Friday clashes between police and Muslim Brotherhood supporters was killed by a gunshot wound to the head, according to forensics official Hisham Abdel Hamid. 22 year-old journalist Mayada Ashraf, who was killed during clashes between Egyptian police and Muslim Brotherhood supporters. (Photo by Nameer Galal/NurPhoto) ---(Copyright Nameer Galal/NurPhoto/Corbis / APImages)