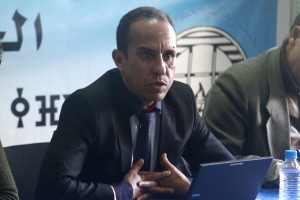 Taboo breaking Moroccan editor Ali Anouzla announces at a press conference in Rabat on Feb. 19, 2014 that he will launch another news website if authorities don't unblock his old one. Ali Anouzla, who was charged with advocating terrorism and aiding terrorists after his Lakome.com news site wrote about an al-Qaida video criticizing Morocco and its king, has kept a low profile since being freed on bail in October following a month in prison. (AP Photo/Paul Schemm).