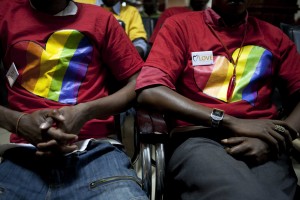 14 february 2010 - Kampala, Uganda - Ugandan gays and their supporters attending a conference to promote homosexuals rights in Uganda. David Bahati's Anti-Homosexuality Bill was tabled in Ugandan Parliament on October 14, 2009, and is currently before the Legal and Parliamentary Affairs Committee of Parliament. The bill proposes the death penalty for homosexuals, imprisonment for heterosexuals who don't turn gays over to the police and the abolition of all organizations that support gay rights. Homosexual acts are already illegal in Uganda and punishable by up to 14 years in prison. Photo credit: Benedicte Desrus / Sipa Press/1002152233