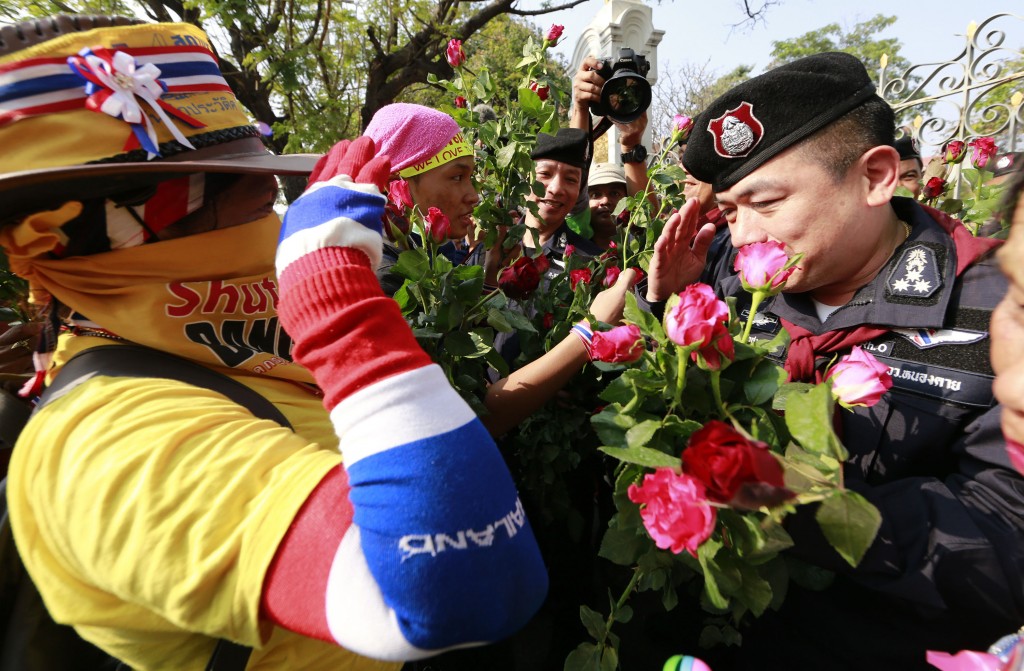 A Color Coded Conflict in Thailand

Thai police arrested a leader of the anti-government protest movement on Monday, their first such move since demonstrations that have paralyzed the country’s government began in November.

The demonstrators have been calling for the results of the national elections, held on Feb. 2, to be annulled. Prime Minister Yingluck Shinawatra’s Pheu Thai party was widely expected to win the poll, though results have been delayed after protesters blocked access to some polling places.

This is just the latest in Thailand’s tumultuous relationship with democracy. Current protests look like a repeat of the 2008 unrest that led to the removal of ex-prime minister Somchai Wongsawa and the 2006 turmoil that led to the military ouster of former prime minister Thaksin Shinawatra, Yingluck’s brother.

Behind the ongoing unrest is a fundamental political divide in the country between the largely urban and middle class opposition “yellow shirts” and the mainly rural and poor supporters of the ruling party, known as the “red shirts.” Below is an explanation of each side.

The newly formed People's Democratic Reform Committee (PDRC) is but the latest manifestation of anti-Shinawatra groups whose protests also led to the 2006 coup against Thaksin. Their supporters wear yellow, the color of the Thai royalty. Comprising mostly middle class Thais from Bangkok and the wealthier south, yellow-shirts have seen their influence wane under the Shinawatras.

During his 2001 to 2006 premiership, Thaksin engaged in populist reforms and spending programs that benefitted his rural supporters. The political ascendance of the rural poor and working class caused unease among the urban middle class. The yellow shirts see the poor as uneducated and naive in their support of the Shinawatras, who have been dogged by corruption scandals.

Among the leaders of the opposition at the time was media mogul and right-wing politician Sondhi Limthongkul. In 2006, Sondhi’s allegations of abuse of power and corruption against Thaksin fuelled the street protests that led to the military coup that forced the prime minister into exile.

The yellow shirts have traditionally been allied with the conservative, royalist Democrat party and its leader, Abhisit Vejjajiva. The Democrat party, which was the main elected opposition until parliament was dissolved in December, has not won an election since 1992.

In its most recent iteration, the “yellow shirts” have been led by former deputy prime minister Suthep Thaugsuban. Suthep faces murder charges for allegedly ordering a military crackdown on red shirt protesters in 2010 that left more than 90 people dead over two months.

Suthep resigned from the Democrat party in 2013 to form the PDRC. The move came amidst discontent over Prime Minister Yingluck Shinawatra’s attempt to pass a bill that would have granted amnesty from criminal prosecution to some political figures, including her brother as well as her political opponent Suthep.

The yellow shirt’s dissatisfaction with the current government came to a head in November when anti-government protesters called for the king to establish an unelected “People’s Council." The yellow shirts view the current prime minister as a puppet for her brother, who is living in Dubai.

Many Thais remain loyal to Prime Minister Yingluck and her Pheu Thai party. The United Front for Democracy Against Dictatorship’s (UDD) was formed in 2006 to oppose the military coup and support then Prime Minister Thaksin Shinawatra. The followers, who wear red, are currently holding counter-protests in support of the current government. They also favor completing elections begun Feb. 2, which the ruling party is widely-expected to win.

The UDD is made up of mostly poor, working class and rural Thais from northern Thailand. Although many members of the red shirts support the Shinawatras, some are simply against the yellow shirts, whom they see as anti-democratic.

The loyalty of many poor Thais to both Thaksin and Yingluck Shinawatra runs deep because of the benefits they received under both premierships. Thaksin implemented reforms including universal health care and redistributed land from wealthy elites to the poor. Yingluck, whose party won in 2011 with 265 out of 500 seats in the lower chamber of the country’s parliament, has raised the minimum wage and expanded subsidies for rice farmers.

Despite calls for restraint, the demonstrations have sometimes become violent. Since they began in November, ten people have died and at least 600 have been injured as a result of violence, according to CNN.