Russia and the ice-shining mountains: a brief history of the Caucasus 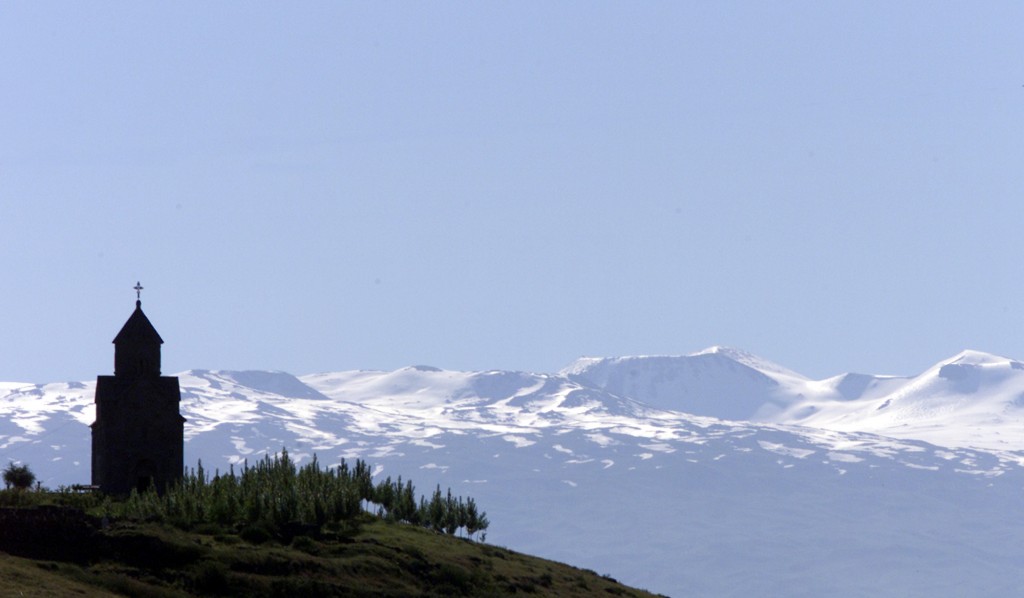 The 13th century Armenian Apostolic cathedral stands atop a hill on the backdrop of snow-covered Caucasus Mountains in Gekhard, Armenia, May 26, 2001. Photo Credit: AP/Misha Japaridze

The term Caucasus is said to originate from an ancient word meaning “ice-shining mountain” – an image familiar to any who have been watching the 2014 Winter Olympics in Sochi. While the northern part of this region is now Russian, various parts of the volatile area have been under Roman, Turkish, and Persian rule.

The modern day Caucasus consists of the Russian-controlled Northern Caucasus region and the Southern Caucasus, parts of which belong to Armenia, Azerbaijan and Georgia. There are nine Russian republics in the Northern Caucasus, including the Chechen Republic, where Russia fought two bloody civil conflicts against separatists between 1994 and 2000.

Russia’s presence in the region grew in the early 19th century when Russia was trying to strengthen its presence on the Black Sea coast, which provided a gateway to the Mediterranean. During the Russo-Persian War of early 1800s Russia was able to annex Georgia and most of the Caucasus. Shortly after that, during the Caucasian War, Russia asserted its control over the various territories and tribal groups in the Northeast Caucasus--what are now the Russian republics of Dagestan and Chechnya.

A second war with Persia in the1820s granted Russia the entire South Caucasus, completing its dominance over the region and giving Russia direct access to the Middle East.

In one of the first cases of modern ethnic cleansing, Russia purged the Northwest Caucasus of Circassians, an indigenous people in the region. Most were sent to the territories of modern day Turkey while some were relocated within Russia.

Many of these Circassians came from the area around Sochi. This year marks the 150th anniversary of the Sochi massacres and deportation of Circassians to Turkey, and many of descendants of the deported Circassians have spoken out against the Olympics being held in their ancestral home.

In the 1940s, hundreds of thousands of people from indigenous ethnic groups in the Caucasus region once again became targets for resettlement. People from several non-Slavic groups were deported en masse to Siberia and Central Asia by the Soviet government as an attempt to ethnically cleanse the region. As many as 25 percent of those that were deported died, according to French historian Nicolas Werth.

Flowers are fixed at an entrance to Lubyankka subway station on Wednesday, March 31, 2010. The Moscow subway bombings shocked a country that had grown accustomed to such violence being confined to a restive southern corner such as Dagestan, and marked the return of terrorism to the everyday lives of Muscovites after a six-year break. Federal Security Service, former KGB headquarters seen at the background. Photo Credit: AP Photo/Alexander Zemlianichenko

Once the Soviet Union dissolved in 1991, Armenia, Azerbaijan and Georgia became independent states. Since then, six major territorial disputes have come about between Russia and the three countries. The result has been a checkerboard of administrative control, such as the Azerbaijani exclave of Nakhchivan, which is surrounded by Armenia, Iran and Turkey or Georgia's disputed Abkhazia and South Ossetia regions. The last of these disruptions was the brief Russia-Georgia war in 2008, which destroyed the South Ossetian capital Tskhinvali and resulted in Russia and a handful of other countries recognizing South Ossetia and Abkhazia as independent republics.

Inside the Russian North Caucasus, Chechnya has been home to conflict for centuries as various Chechen nationalist and Islamist movements have battled Moscow. While the South Caucasus states were granted independence after 1991, Chechnya was not. Since then there has been near-constant fighting in the region. The First Chechen War of 1994-1996 ended in a Russian withdrawal and de facto independence for Chechnya’s separatist government. The second war, from 1999-2000, came about after the Chechnya-based Islamic International Brigade’s invasion of the neighboring Russian Republic of Dagestan. Russia again invaded Chechnya and was able to capture the capital Grozny was able to establish direct rule over the region in May 2000, but has faced sporadic insurgency for almost a decade after. Russia has helped keep control over the region through large subsidies from the federal government. Russia dumped $30 billion into the North Caucasus between 2000 and 2010 and plans to spend another $80 billion by 2025, according to Ben Judah, author of “Fragile Empire: How Russia Fell In and Out of Love With Vladimir Putin.”

Russia officially declared an end to anti-terrorism operations in Chechnya in 2009, but the region continues to be a source of instability. Radical Islamists from the region have claimed responsibility for the 2010 Moscow subway bombings, the 2011 Domodedovo airport bombing and, the two Volgograd bombings in December 2013. One Islamist militant group, the Caucasus Emirate, said that it would actively attempt to disrupt the 2014 Winter Olympics in Sochi.