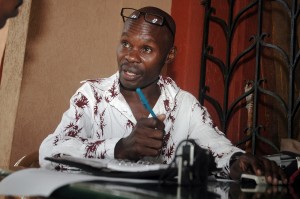 David Cato, a Ugandan gay-rights activist, poses for photographs at a restaurant in Kampala, Uganda, Tuesday, Dec. 8, 2009. Proposed legislation would impose the death penalty for some gay Ugandans, and their family, friends and even landlords also could face up to seven years in jail if they fail to report them to authorities. Cato became an activist after he was beaten up four times, arrested twice, fired from his teaching job and outed in the press because he is gay. (AP Photo/Stephen Wandera)