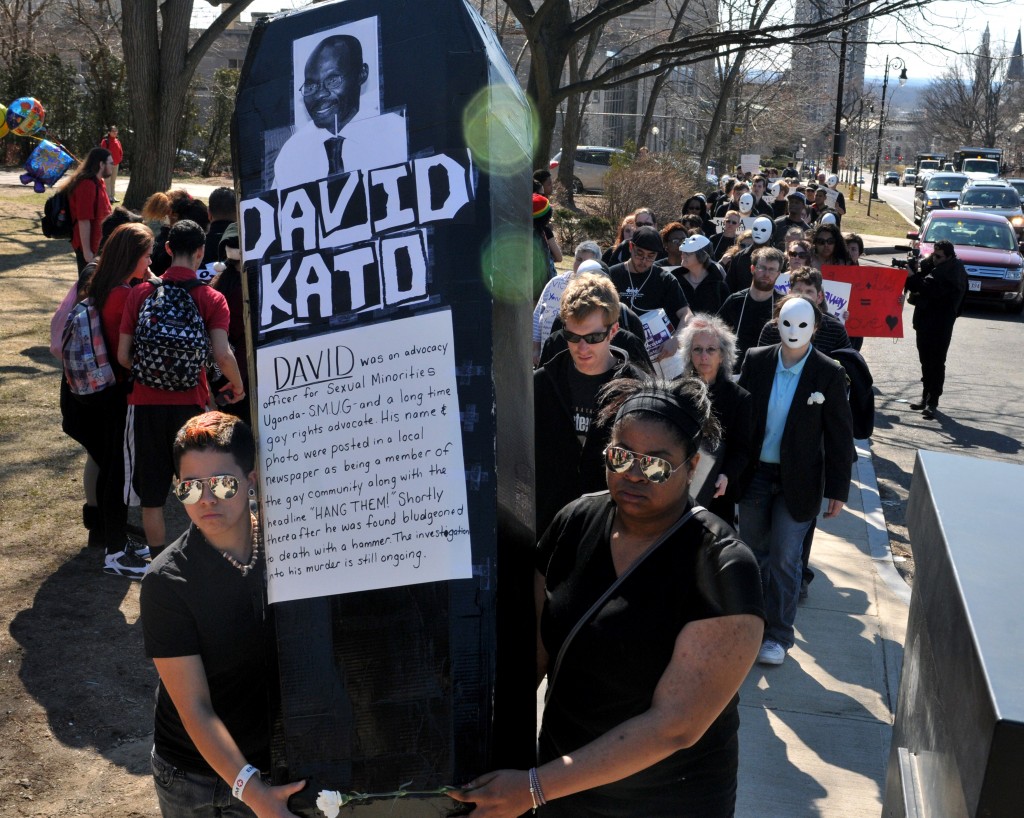 The Life and Death of David Kato

David Kato was the first openly gay man in Uganda, a dangerous title in a country known for its hostility to homosexuals. In December, the country’s parliament passed a bill that punishes “aggravated homosexuality” with life in prison.

Kato, a schoolteacher by training, paid a higher price. An advocacy officer for Sexual Minorities Uganda (SMUG), he publicly challenged the government and people that tried to push the gay community into hiding.

“If we keep on hiding, they will say we’re not here,” Kato said, in Call Me Kuchu, the 2012 documentary.

Kato moved sharply into the public eye in the central African nation after he was named one of the nation’s ‘Top 100 Homosexuals’ in 2010 by the Ugandan tabloid Rolling Stone.

The cover story included the names, faces and addresses of supposed homosexuals and their allies with a banner stating “Hang Them.”

Kato said that after the list was published, he constantly feared for his life and received countless death threats.

"The villagers want to set my house ablaze," he told CNN in 2010. "They want to burn my house. 'Can you go away before my house is burned?’”

After the story, Kato and fellow SMUG members and advocates, Kasha Nabagesera and Julian Patience Onziema, filed a suit against the paper accusing it of invasion of privacy.

The newspaper, was unrepentant. "… The war against gays will and must continue,” said Giles Muhame, the director of Rolling Stone “We have to protect our children from this dirty homosexual affront.".

Kato and his allies won a court injunction barring the paper from publishing lists of alleged gays. On Jan. 3, 2011, a judge ordered the paper to pay Kato and his co-defendants 1.5 million Ugandan shillings.
After the lawsuit, threats against Kato grew increasingly frequent and severe.

"Since the ruling, David said people had been harassing him, and warning they would 'deal with him,'" Onziema said.

Less than a month after the court victory, Kato, was working at his home in the town of Bukusa, Mukono when a 22-year-old acquaintance struck him twice in the head with a hammer, killing him. The assailant then fled on foot.

Sidney Nsubuga Enoch, 22, was convicted of Kato’s murder on Nov. 10, 2011 and sentenced to 30 years of hard labor. Enoch claimed that he was provoked by Kato’s sexual advances towards him.

In 2012 Call Me Kuchu, was released—Kuchu is a slang word for homosexuals in Uganda. It shows the last year of Kato’s life as well as the gay community’s struggle for acceptance and peace in their homeland.

He combatted state-sanctioned persecution of gays, promoted tolerance, and offered help to his fellow homosexuals.

Call Me Kuchu touches on the subject of American evangelical missionaries’ anti-gay preaching in Uganda—a subject which is the focus of God Loves Uganda, a separate documentary released last year.

During this work, some missionaries teach that homosexuality is an evil threat from the west, increasing hatred for gays in Uganda. Whatever the truth of that, both films show that in fact strident homophobia is a major import from fringe elements of the American evangelical movements.

Call Me Kuchu ends with the funeral of Kato, who couldn’t escape public hatred even after his death.

Anti-gay protesters attempted to disrupt the funeral, preaching about how homosexuals are evil and their actions must be eradicated.

Onziema and Nabagesera, Kato’s co-plaintiffs in the suit against Rolling Stone, continue to work for the rights of homosexuals in Uganda. Still, Uganda’s surviving gay rights advocates worry for their own lives, and those of all homosexuals in the country.