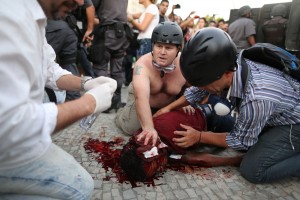 Local TV cameraman Andrade Santiago is helped after he was injured during violent clashes with police during a protest against a bus fare increase in Rio de Janeiro, Thursday, Feb. 6, 2014. Police said Thursday that the cameraman for the Band TV station was injured in the protest and is in serious condition. It was not clear if the journalist was hit by a homemade explosive thrown by protesters or a stun grenade shot by police. (AP Photo/Leo Correa)