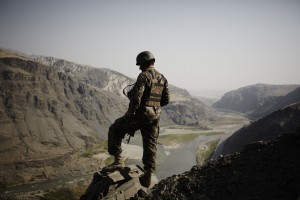 ***Award winning Sipa photographer Sebastiano Tomada spent several weeks inside the Afghan National Army - traveling to the combat outpost in the Laghman Province, living with the troops and witnessing the start of the fighting season 2013***A Afghan National Army soldier overlooks a valley in eastern Afghanistan.
Afghanistan has seen a very active start to its fighting season in 2013.
The Afghan National Security Forces in particular the ANA(AfghanNationalArmy) has been at the fore front of the fight, while the NATO led International Security Assistance Force has largely disengaged and transitioned into a supporting,advising and training role while preparing for its exit from the country. (Photo by Sebastiano Tomada/Sipa USA)