A tale of two Ukraines 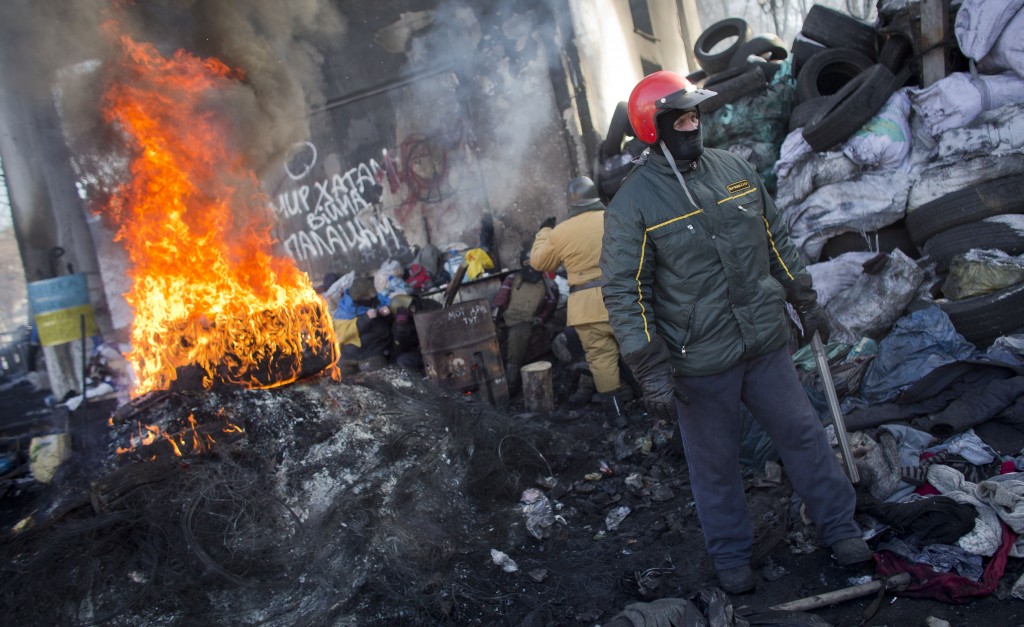 A protester armed with a metal stick stands next to a burning tire on a barricade in central Kiev, Ukraine, Thursday, Jan. 30, 2014. Photo Credit: AP Photo/Darko Bandic

Two Ukraines In One

Before taking sick leave on Jan. 30, the Ukrainian President Viktor Yanukovych issued a statement saying the Ukrainian authorities have done all they can to resolve the conflict. Anti-government protesters have not left Kiev’s central Independence Square since November. What started as a peaceful rally in support of Ukrainian integration into the EU turned into violent turmoil, and the biggest protest since the breakdown of the Soviet Union has since affected the entire country.

The country’s political divisions fall roughly on geographic lines. The country’s west has historically aligned with Europe, and has largely supported the opposition to Yanukovych. The industrial east has strong ties to Russia and is the president’s political heartland. The two sides are in the midst of a serious clash that has reminded the world that, despite the parameters of their border, Ukraine is still as divided as ever.

The Dnieper River, which crosses Ukraine’s capital Kiev, divides country into two parts. The Western one is commonly known as Right Bank, while the eastern one - Left Bank. The West speaks predominantly Ukrainian and is culturally more linked with the countries in Central Europe than Russia. This part of Ukraine was controlled by Poland and Austria for hundreds of years and officially became a part of Ukraine Soviet Socialist Republic after World War II against their will. Before that some western Ukrainians even joined the Nazi army to fight against Soviets, and others had aspirations of creating an independent state.
Russians constitute 17 % of Ukraine’s population. They mainly inhabit Left Bank of the country, including Crimea - one of the favorite vacation destinations for the Soviet elite.

Russians came to the eastern Ukraine to work in the heavy industries that were created during the Stalinist regime—and Russian is widely spoken in eastern Ukraine. Nearly a quarter century after the fall of the Berlin Wall, the destruction of a statue of Lenin in Kiev on Dec. 7 caused a lot of grievance among people in the East. Demographically and historically divided, Ukraine has always been torn between Europe and Russia. Russia offers access to cheaper natural resources and a wide market for Ukraine’s industry, while pro-European politicians see the European Union’s democracy and open market requirements as the path to prosperity and stability.

Ukraine and the EU have come close several times to signing comprehensive free trade agreements. Most recently an EU Association Agreement, which would enhance economic, social and cultural exchange between the two entities, was initiated in March 2012. The far-reaching agreement, described as “unprecedented in its breadth and depth” by an EU memo, would increase security agreements and call for greater liberalization of markets and travel visas between the EU and Ukraine. It would offer “enhanced cooperation” in many key policy areas, including macroeconomic stability, science, technology, public health and education.

However, the process was interrupted because of the treatment of imprisoned opposition leader and former Ukrainian Prime Minister Yulia Tymonshenko. Her release was one of the EU’s main conditions for the agreement. Tymonshenko, a member of the pro-European, right-wing Fatherland party, was sentenced to seven years in jail in 2011. She was charged with abuse of power and embezzlement. Many believe that the trial was politically-motivated because it came just after the 2010 presidential election, when Tymoshenko lost to Victor Yanukovych.

Ukraine was close to completing another association agreement and a comprehensive free trade agreement with Europe in November. Yanukovych, under intense pressure from Russia, scrapped the agreement.

Russia has consistently maintained influence in Ukraine through its distribution of cheap gas and oil. Ukraine’s access to the Black Sea is vital for Russian shipping, and the city of Sevastopol, in the Crimean peninsula, is home to the Russian Navy’s Black Sea Fleet. In addition to low-priced energy and fuel, Russia has offered pay for the construction of two new reactors at a nuclear power plant in western Ukraine and to buy $15 billion in Ukrainian bonds. This would be a significant boost to an economy in turmoil. But the West and opponents of President Yanukovych are skeptical of Russia’s intentions.
“I know of only one place where you can find free cheese – and that’s in a mouse-trap,” said Arseny Yatseniuk, opposition leader of the Fatherland party, according to Reuters.

Historically, Russian muscle has also proven effective in thwarting agreements between Ukraine and the West. In some cases, Russian prime minister Vladimir Putin has used threats of force. In 2008, Putin threatened Russian annexation of Eastern Ukraine and Crimea if Ukraine joined NATO.

Valery Kalnysh, editor of the Kommersant Ukraina newspaper, reported that following talks last month between President Yanukovych and Vladimir Putin, Ukrainian opinions fall into one of three camps.
“The first camp believes that Yanukovych has sold his country down the river in return for cheap gas and credit; the second that Russia has been made to pay for Ukraine’s U-turn on integration with Europe; and the third that Yanukovych has saved his country,” Kalnysh said, according to al-Jazeera. “But all three are united on one thing – that Kyiv is even more dependent on Moscow than ever before.”