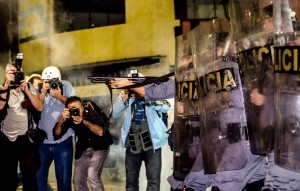 Photographers taking pictures of riot police shooting rubber bullets and tear gas
Protest against increase in bus fares, Sao Paulo, Brazil - 13 Jun 2013
This was the fourth day of protest and the one most violently suppressed by police. Again according to MPL, more than 100 people got injured. Seven journalists of the main newspaper in Brazil, Folha de Sao Paulo, got shot with rubber bullets, two of them in the face, leaving one of them in danger of losing her sight in one eye.
And at least 241 people were arrested, some charged with "carrying vinegar" (to relieve tear gas effects), including a journalist called Piero Locatelli, from Carta Capital magazine, arrested for being possession of vinegar.
According to the callers of the demonstration - called Movimento Passe Livre - around 15,000 people marched peacefully trough Sao Paulo's downtown, until the police started shooting tear gas, pepper spray, bombs and rubber bullets against people calling for a peaceful protest.
(Rex Features via AP Images)