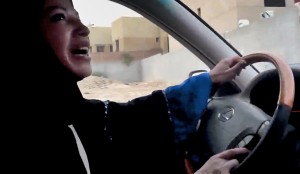 FILE - In this Friday, June 17, 2011 file image made from video released by Change.org, a Saudi Arabian woman drives a car as part of a campaign to defy Saudi Arabia's ban on women driving, in Riyadh, Saudi Arabia. Its been a little more than two years since the last time women in Saudi Arabia campaigned for the right to drive. Since then, the monarchy has made incremental but key reforms, and activists hope that has readied the nation for greater change as they call for women to get behind the wheel in a new campaign Saturday, Oct. 26, 2013. Ultraconservatives are pushing back with protests, threats and even a clerics warning that driving a car damages a womans ovaries.(AP Photo/Change.org, File)