Looking back at Berlin's past 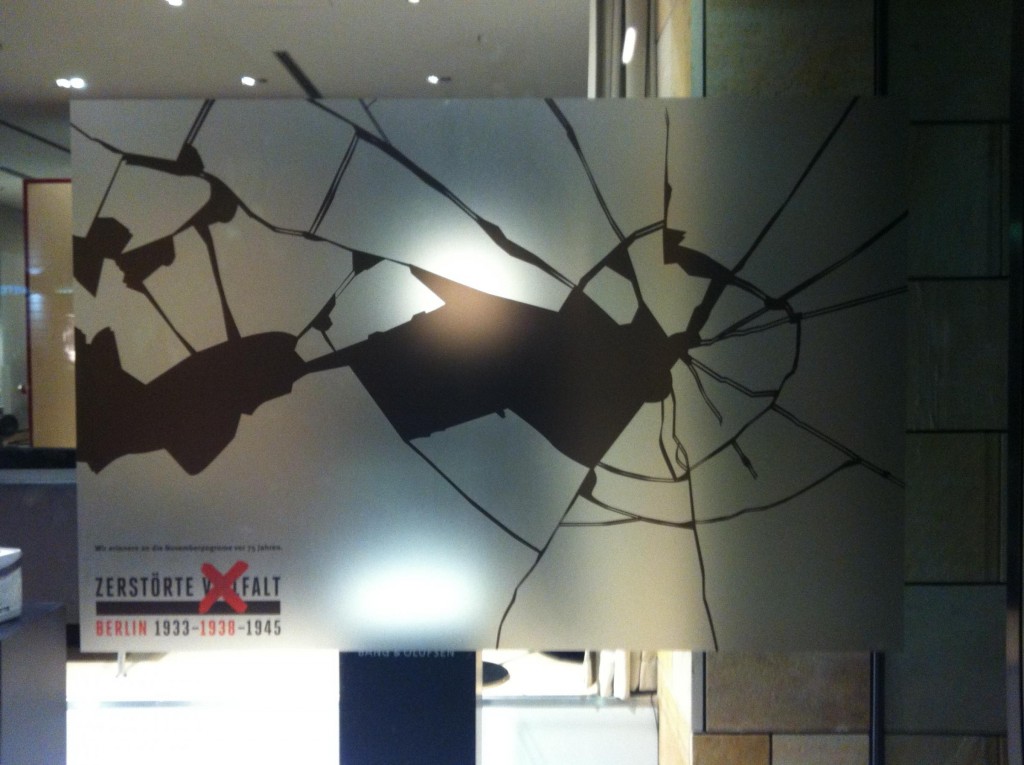 Stores throughout Berlin placed decals on their windows to mimic the broken windows of Kristallnacht.

The 9th of November is an important day in German history, for both highs and lows. It's the day the Berlin Wall fell in 1989, and it's the day the German states became a republic in 1918 before the end of World War I.

However, November 9 is also the anniversary of Kristallnacht –  the night of broken glass. On that night in 1938, the Nazis led riots through the cities of Germany. Jewish owned businesses were ransacked; their storefronts defaced with graffiti; their windows smashed. Nearly 30,000 Jews were arrested that night alone, and sent to concentration camps throughout the Reich. Historians widely consider Kristallnacht to be one of the first major events in the run-up to the Holocaust.

Berliners reflected on the historical events of Nov. 9 in many different ways. While scores gathered near the Brandenburg Gate to celebrate the fall of the Wall and the eventual reunification of Germany, a quieter commemoration occurred across town near the Zoologischer Garden. Crowds gathered in the Kaiser Wilhelm Gedächtniskirche – a church that was partially destroyed in the Second World War and rebuilt during the 1960s – to hear a classical chorale concert from the Tilburg Festival Orchestra and the Philharmonic Choir Toonkunst Rotterdam. The program included Michael Tippett's "A Child for Our Time," an oratorio written during World War II to specifically commemorate Kristallnacht.

Other remembrances took place through Berlin. Stores along Unter den Linden in downtown Berlin placed decals over their windows to make them look like they were smashed in, and a march through affected parts of the city took place earlier in the day.

Ariane Pauls is an German artist who's lived in Berlin for more than a decade. She says both Berlin, and Germany as a whole, are very mindful of what's happened in the past, and that such remembrance starts from a young age.

"I grew up in such a way that I never even questioned it," she said in German. "It was clear from the very beginning that you have to set yourself apart from your story and first of all to carry a particular type of responsibility, which now, in retrospect I would not see it the same way […] Basically, it is an integral part of our society that we are aware of the past and we must also take steps for another way, a way to get around doing a memorial right after another. Especially in Berlin, it is a strong statement but there is a danger that in Berlin, the message will be relativized across the multitude of memories and constructed remembrance."

When I asked what she meant by that, Pauls responded in English.

"It might keep people from reflecting and thinking about it," she said. "But, then, with the Memorial for the Murdered Jews, for example, it's meant to spend time in there and experience it, so you have time to contemplate. It's not just a sculpture you stand before and read the information and then that's it."

Others, like American journalist Rachel Witte, who was in Berlin for the commemoration, think that Germany's efforts to commemorate its history are sometimes as subtle as not knocking down old buildings.

"You walk around the cities, and you see that it's there," she explained. "There's constant reminders, you know, from the Soviet style architecture that still permeates a lot of East Berlin, to the Berlin Wall memorial – the history is there and there's no denying it. I think today Germany has reached a point where it is, you know, embracing its history and moving forward. So, now the cities have this kind of duality about them, which I think is just entirely fascinating."

With its memorials to the different groups murdered during the Holocaust, its tributes to the Berlin Wall, and its museums detailing abuses by the East German state security forces, or Stasi, Berlin reflects a nationwide effort not just to preserve the past, but to keep it in the back of the collective consciousness. The efforts to mark Kristallnacht were no exception.