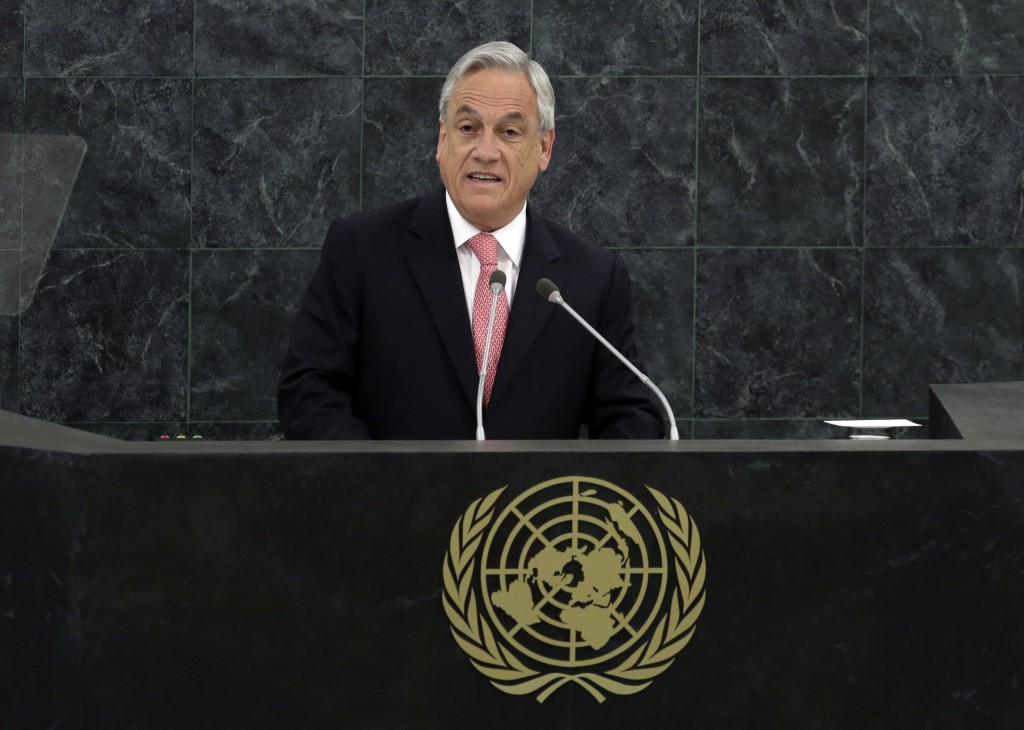 During his latest official speech to the United Nation’s General Assembly on Sept. 24, Chilean President Sebastian Piñera advocated Chile’s candidacy as a nonpermanent member of the UN Security Council for the next two years. He highlighted the need for UN members to cooperate more in the “new world.”

Three weeks later, on Oct. 17, Chile was unanimously elected by all Latin American UN members and 186 out of 191 total members of the UN, an overwhelming majority.

Thanking “the 186 countries for supporting and putting their trust in Chile,” Piñera set the fundamental principles of his country’s duties at the intergovernmental organization.

"The principles of non-intervention, peaceful settlement of disputes and equality of states under the law will be fundamental to our country's task in this body," Piñera said. He also insisted on incorporating Brazil, Germany, Japan and India, as permanent members.

Despite Chile’s election to the Security Council, candidates in the upcoming presidential elections have not elaborated very much on Chilean foreign affairs. In fact, social issues were key issues in candidates’ platforms.

Michelle Bachelet, the top candidate to win the presidential elections, admits in her program: “Chile lost ground in the region, its relationship with its neighbors are problematic and the other countries think Chile has a mercantile vision of our relationship with them.”

With a population of 17.4 million and the 38th GDP in the world, according to the World Bank, Chile remains a strong and stable economy. With high export numbers, reduced public spending and a well-defined fiscal policy, the country’s economy resisted the crisis better than any other Latin American country. In 2012, Chilean economy grew 5.5 percent and is more stable than the regional leaders, Brazil and Argentina.

In June, the United Nations Conference on Trade and Development included Chile in the top 10 most attractive global economies for foreign investments. Joel Fensch, an editor at PanAmPost, said that Chile’s membership at the Security Council should strengthen even more the country’s economic influence in the region. Chile can become a mediator for discussions in the MERCOSUR or the UNASUR, the two largest regional economic organizations, Fensch told Global Journalist in a phone interview.

Having recovered from Pinochet’s dictatorship (1973-1988) with a strong private sector and principles of competitiveness and economic freedom, Chile’s economy has remained attractive in the region in contrast to populist governments such as in Venezuela, Argentina, Bolivia or Ecuador.

“Although there is no economic or political hegemony in the region, other countries are somewhat envious of Chile's success,” Stefan Bauchowitz, co-founder of Tresquintos.com, a website that provides political analysis and electoral previsions on the Chilean presidential elections, told Global Journalist in an interview via email.

Despite being considered a model of both economic growth and stability, Chile remains a small economy.

“In regional terms, Chile is a small country, dependent on mining and agricultural products,” Bruce M. Bagley, a professor of Political Science at the University of Miami specializing in Latin America, told Global Journalist in a phone interview.

Even though presidential candidate Bachelet wants to strengthen Chile’s economic and political ties with other Latin American countries, Bagley said current situation in the region, which has shown limits in economic growth, is not favorable. MERCOSUR has been torn by tensions between Brazil and Argentina. Both countries aspire to leadership of the subcontinent.

“Chile needs a global market, not only a regional market,” Bagley said.

In her platform, Bachelet says that Chile can be an intermediate between the region and other side of the Pacific Ocean. Chile is one of the four members of the Pacific Alliance, created in 2011 with Mexico, Colombia and Peru. The Alliance plans to reinforce the integration in Latin America with a broad trade agreement and a 100 percent tariff reduction among the countries. Chile is also a close partner of the U.S. and wants to develop economic ties with Asian countries.

If Chile has a vigorous economy and a stable democracy, the country is not an active diplomatic actor in the region.

“Piñera has been unwilling to establish leadership in the region,” Bagley said. As an example he pointed to Chile’s absence in the recent negotiations between the Colombian government and the FARC to reinsert the rebel group in the political life of the country. To Bagley, those negotiations, in which Cuba participates, should have involved other Latin American countries.

“Chile is not known for its foreign policy activism,” Bauchowitz said. “It rather emphasizes its independence regarding formal regional integration.”

One of the reasons for Chile keeping the distance could be its limited military power.

“Chile is not going to become a major security leader in the region because the military must remain subordinated,” Bagley said.

In a country, which stills remembers Pinochet’s dictatorship and his military coup in 1973, the army’s role has been reduced to a minimum.

“I don’t think Chile is going to adopt any real visionary role,” Bagley said. The new task in the UN Security Council is not a powerful lever as well. Nonpermanent members have only limited influence in decision-making.

“It does give the country some exposure and prestige regarding international affairs, [but] Chile will certainly not shape the UN Security Council's agenda to a great extent,” Bauchowitz said.

However, the nonpermanent seat at the Security Council can foster or damage the relationships with Chile’s neighbors. One of the main issues could be drug trafficking. Bagley noted that Chile might have to implement security cooperation with Brazil and Argentina, the second and third largest consumers of cocaine in the world.

“Trends tend to spread, especially in Latin America and within its richest economies,” Bagley said.

If Chile’s policy in Latin America has been based on free-trade partnerships and diplomatic independence, security issues might oblige the country to be more involved in the region.