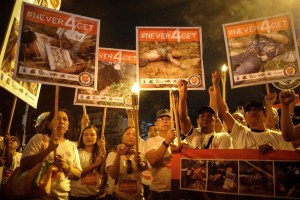 23 Nov 2013, Manila, Luzon Island, Philippines --- Protesters hold up placards with pictures of the bodies from the 2009 massacre in Maguindanao during a demonstration outside the presidential palace in Manila, Philippines, November 23, 2013. Families of the 58 people, including 32 journalists, massacred in Ampatuan town four years ago are demanding compensation as the government has unfulfilled its promise to speed up the trial against those accused of what many call as the worst politically motivated crime in the country's history. Photo: Ezra Acayan/NurPhoto ---(Copyright Ezra Acayan/NurPhoto/NurPhoto/Corbis / APImages)