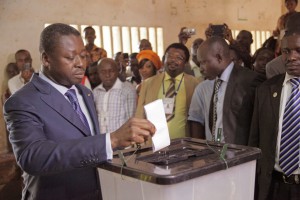 Togo President Faure Gnassingbe casts his ballot in the city of Lome, Togo, Thursday July 25, 2013. Togo has begun voting in a twice-delayed legislative election that is a test of whether mounting discontent with the West African nation's long-ruling family dynasty will translate into electoral gains for the opposition. Eyadema Gnassingbe came to power through a coup and ruled Togo from 1967 until his death in 2005, when his son Faure Gnassingbe took over following a flawed and violent election. Faure Gnassingbe has ruled since, but frustration with the government has spurred protests even in the family's northern strongholds. (AP Photo/Erick Kaglan)