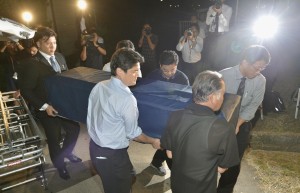 TSURU, Japan - A casket containing the body of Mika Yamamoto, a Japanese journalist killed in Syria while covering the civil war there, is carried into her parents' home in Tsuru, Yamanashi Prefecture, after police conducted an autopsy on Aug. 26, 2012 at a university hospital in Tokyo. Yamamoto, 45, an award-winning journalist, was shot dead Aug. 20 in the northern Syrian city of Aleppo during a clash believed to have been between rebels and forces loyal to President Bashar al-Assad's regime. (Kyodo)