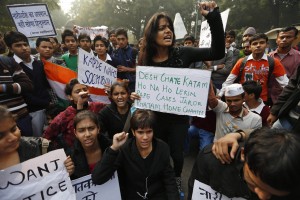 FILE - In this Monday, Dec. 24, 2013 file photo, Indian students carrying placards shout slogans against the brutal gang-rape of a woman in a moving bus during a protest in New Delhi, India. A series of recent high-profile gang rape cases in India has ignited a debate: Are such crimes on the rise, or is it simply that more attention is being paid to a problem long hidden within families and villages? The answer, experts say, is both. Modernization is fueling a crisis of sexual assault in India, with increasingly independent women now working in factories and offices and stepping beyond the subservient roles to which they had traditionally been relegated. The placards reads: "Change attitude towards women and not the way they dress," "India will not withstand insult to women" and "whether the country ends or not all rape cases should come to an end." (AP Photo/Saurabh Das, File)