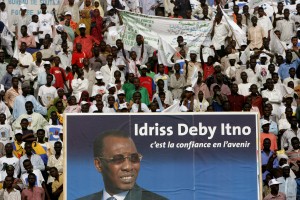 Supporters of Chadian President Idriss Deby gather behind a poster of the President, Sunday, April 30, 2006, during his last campaign rally in the capital, N'djamena before next week's election. Deby ended Sunday his campaign for a third term in the capital, promising to make Chad, "a champion," and saying that those calling for an election boycott are not democrats. Poster reads: "Idriss Deby Itno is the hope for the future." (AP Photo/Karel Prinsloo)