A perilous journey of kidnapping 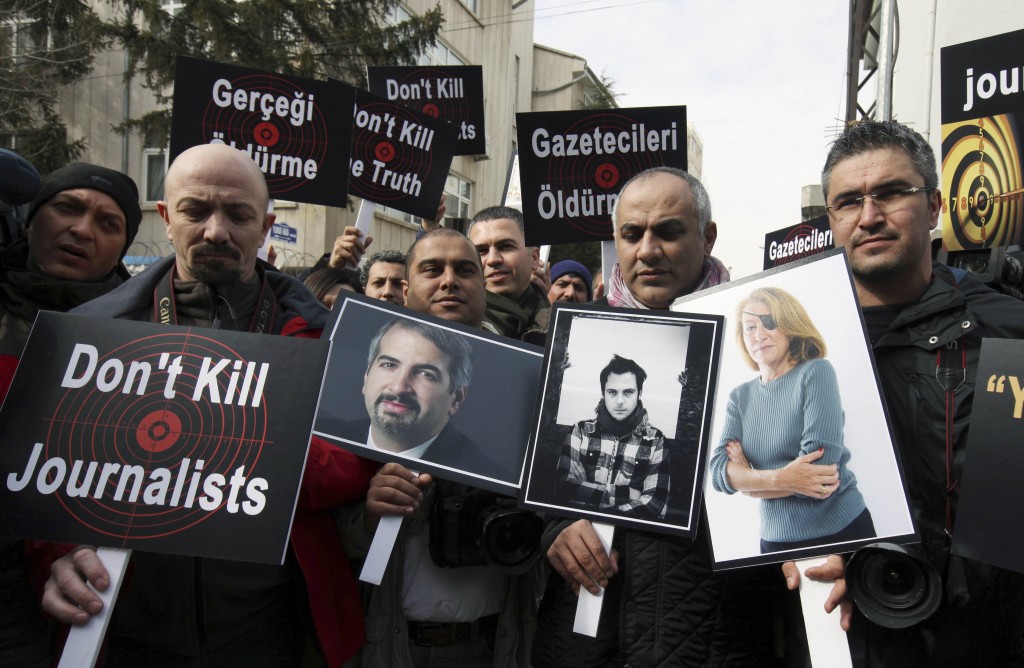 As the United States considers military action in Syria, the country remains the most lethal place in the world for journalists. The Committee to Protect Journalists (CPJ) reported that 15 journalists are currently missing in Syria. Charles Lister, an analyst at HIS Jane’s Terrorism and Insurgency Centre, told Vice on Saturday that in recent weeks there has been a discernible spike in reported kidnappings in northern Syria.

A little more than a year ago, Global Journalist interviewed French-American photojournalist Jonathan Alpeyrie as he was about to return to Syria. Several months later, he was captured by militants, held for ransom, and was just released in July.

The 34-year-old reporter has spent the last decade covering fifteen different conflicts, including Libya, Chechnya and Afghanistan. He was traveling in the south of Syria when he was abducted by militants on April 29. Alpeyrie believes he was betrayed by a fixer while attempting to reach a rebel unit 30 kilometers north of Damascus.

“They had a checkpoint waiting for me,” said Alpeyrie on the latest episode of Global Journalist. “The guys were wearing ski masks and had machine guns, they dragged me out of the car... [and] pretended to execute me with a pistol, then blindfolded me, handcuffed me, put me in a car, and that’s how it all began for me.”

Alpeyrie spent the next five and a half weeks handcuffed to a bed. His captors tortured him psychologically, conducting mock-executions in the house he was imprisoned in.

“Once with pistols, once with a machine gun on my forehead, once they came in with knives [and] pretended to cut my throat,” said Alpeyrie. He added: “I think they were also trying to force me to admit to things that I wasn’t, but I never broke. I never agreed to any of it.”

After three weeks he was taken to another location where he stayed for two months and was allowed more freedom, he said in Le Journal de la Photographie. His captors made him teach them how to use a metal detector and even forced him to teach one of the soldiers to swim. This location was under heavy fire for the duration of his stay, making the experience “difficult, psychologically,” he said. “Not only was I captive indefinitely, but a bomb could have killed me at any moment.”

He told Global Journalist that the lowest point of the ordeal for him was when his captors performed a mock execution with knives: “Being executed by a pistol or machine gun, I was OK with it, I was resigned to it, since it was going to be quick. But being executed with a knife that was a scary thought for me.”

Alpeyrie said the French and American governments prefer he doesn’t say much of his release, but said it was enabled through “powerful contacts” he has in Lebanon. In the end, a Syrian businessman made a large payment in exchange for Alpeyrie’s release.

“My kidnapping was about money. As soon as they got what they wanted, they let me go,” he said in an interview with Le Journal de la Photographie. “When we’re released, we’re not heroes. Even before I was taken hostage, I never thought it was a good idea to publicize kidnappings. It adds to the value of hostages. The press thinks that if we don’t talk about it, we’ll forget about it. But they’re wrong, as long as the family, friends and the authorities are working to liberate the hostages.”

Alpeyrie spoke about his experience on this week’s Global Journalist, and discussed the current situation in Syria. Here are some highlights from the interview:

On the use of chemical weapons:

"It is wrong, obviously. With that being said, I do not believe the Bashar Al-Assad government did it. I am pretty convinced from my experience on the ground, sources, and different things, that the islamist portions of the rebellions are probably the ones that did it, not the Bashar Al-Assad government. For one thing, tactically, it really makes no sense for Bashar al-Assad to use these chemical weapons, because he is winning this conflict and he knows the consequences of using them."

On journalists missing in Syria:

Officially [the number of missing journalists] is between 12 to 15, [but] I know for a fact through various sources that I can’t mention in this interview that there are more. Some have just happened very recently, actually. So, yeah, it’s becoming more and more common for different reasons. As the rebellion is becoming more and more Islamist type fighting force so these militants are more than happy to kidnap western journalists for money or because they’re westerners or because they realized the western press is not going to help them in any way anymore.

On whether he’ll return to Syria:

I think that’s it for me. I was told not to by various people. It’s known now I was captured and money was paid, so I’m assuming other people would try to capture me again. Most people now do think twice about going over and over [to Syria] considering now that kidnappings have become such an important aspect of our work and as a journalist you can’t spend your entire day hiding and not doing your work, so it’s not worth it.