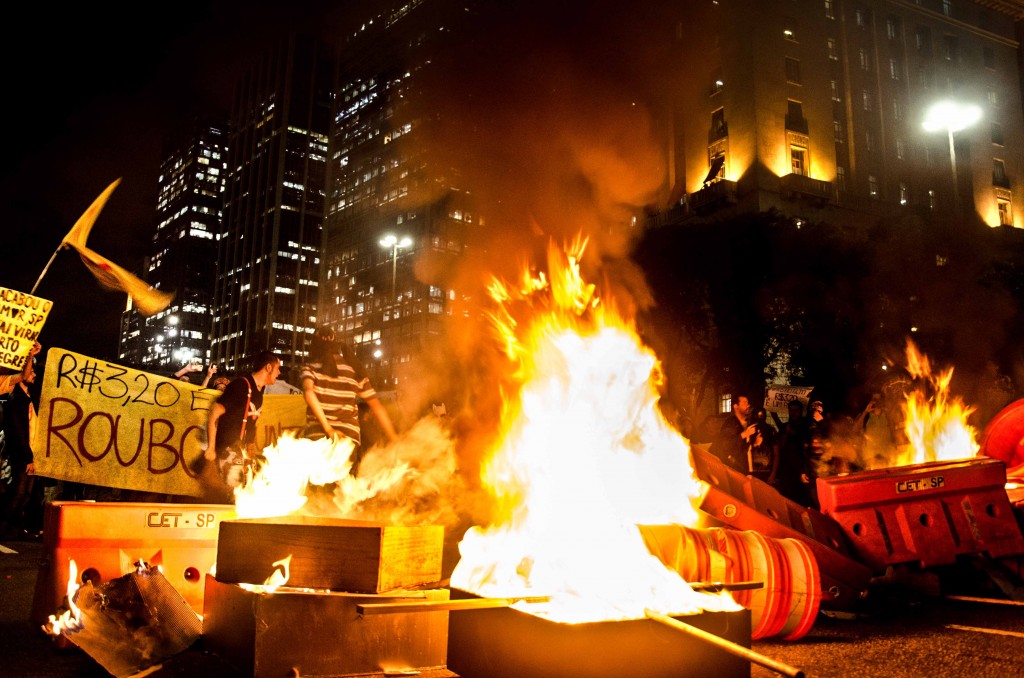 More than a dozen journalists have reportedly been physically attacked, injured, or detained over the past three weeks while covering protests in Brazil that grew out of anger over fare increases on public transportation.

The demonstrations started with a June 6 protest in Sao Paulo against a 20-cent (US$0.09) increase in bus and subway fares. The protests grew quickly and spread to other cities, including Rio de Janeiro, Brasilia, Porto Alegre, and others.

The demonstrations began to take on a more general tone as they spread, with protestors expressing their frustrations at the country’s political corruption and lack of public services. Protestors also vented outrage at the estimated 27.1 billion Reais (more than $12 billion) reportedly required for stadium and transportation updates for the 2014 FIFA World Cup.

While the demonstrations generally began peacefully, they soon grew violent. Some protestors reportedly set fire to vehicles, threw stones, raided stores, and violently battled with police. The biggest crackdown so far occurred on June 13 in Sao Paulo when police fired rubber bullets and tear gas at protestors, during which more than 100 people were injured, including 15 journalists, some of whom claimed that they were deliberately targeted.

Photographer Sérgio Andrade da Silva from the Futura Press agency was struck in the eye by a rubber bullet. According to the Brazilian Association of Investigative Journalists, doctors gave him a less than a twenty percent chance of recovering sight in his eye.

"I wasn’t attacking anyone. I wasn’t cursing at anyone. I was doing my job", Vallone told Folha from her hospital bed in Sao Paulo. "I saw him aiming at me, but I never thought he would fire. You’ll never think that an armed guy in uniform will ever shoot you in the face", she added.

In an article describing the attacks, Folha noted that seven of its staff members, including Vallone, were targeted by policemen at the June 13 protests.

Several journalists have also suffered violence at the hands of other Brazilian security forces.

In Rio de Janeiro, Pedro Vedova, a journalist with GloboNews, was struck in the head by a rubber bullet fired by a police officer outside city hall June 20.

Vladimir Platonow of Agência Brasil, along with several demonstrators, was beaten with batons by security guards at the train station in Niterói when they tried to escape a charge by a special unit of the Military Police on the evening of June 19.

According to local and international reports, military police have been mostly responsible for the attacks against journalists and some of the accompanying arrests. In some cases, however, demonstrators have directed violence at news media covering the protests.

Around 100 protesters in Sao Paulo attempted to expel Caco Barcellos of TV Globo from a march June 18, and accused him of being a government “manipulator.”

A group of protestors also threw stones at a TV Record television truck near Sao Paulo’s city hall and set it on fire. In addition, TV Bandeirantes journalist, Rita Lisauskas was assaulted by demonstrators, who threw vinegar in her face while she was reporting from the protests. The protesters reportedly chanted slogans criticizing Brazil’s mainstream media.

With six journalists killed already this year and 11 in the past two years according to the International Press Institute’s Death Watch, Brazil has become one of the most dangerous countries in the world for journalists. Just recently, José Roberto Ornelas de Lemos, a prominent newspaper executive, was shot 44 times at in Nova Iguaçu, Rio de Janeiro State.