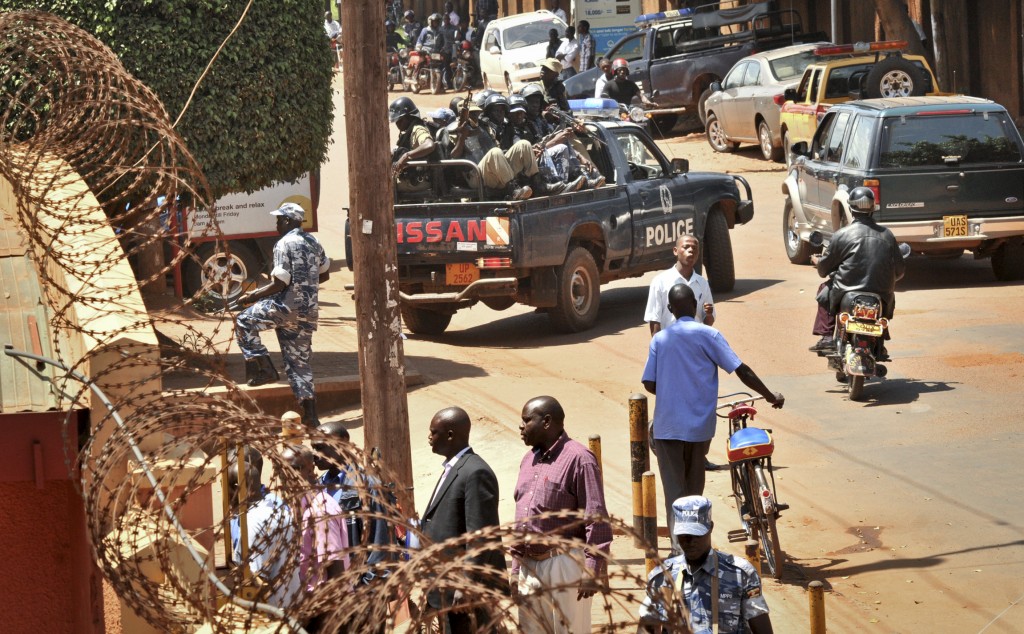 Four Ugandan media outlets were allowed to re-open in the capital of Kampala May 30 after 10 days of police occupation, protest, and physical confrontations between journalists and press freedom organizations on the one hand, and the police on the other.

The Daily Monitor and Red Pepper newspapers, along with the radio stations Dembe FM and KFM, which are owned by the Kenyan-based Nation Media Group, were allowed to resume service the morning of May 30, according to local and international reports.

Government security forces had occupied the four media offices since May 20 in response to a controversial letter written by the Coordinator of Security Services, Gen. David Sejusa, who is currently out of the country. The letter, which was leaked to The Daily Monitor earlier in May, discussed an alleged plot to assassinate government and military officials opposed to Ugandan President Yoweri Museveni’s plans to hand over power to his son.

Kampala police said in a statement that the leak was a crime and that the media buildings were crime scenes that were subject to a search. A magistrate's court then issued the police with search warrants for the premises. According to reports in Al Jazeera, newspaper, The New Vision, was the only English-language daily available during the siege.

According to the press freedom organization, Human Rights Network for Journalists-Uganda, on May 27 Kampala police sprayed tear gas and struck a group of journalists who had been protesting the occupation outside of the closed Monitor offices. Three journalists were arrested and two were charged with inciting violence.

Ugandan internal affairs minister Hillary Onek, announced at the government’s Media Centre in Kampala May 30 that the four outlets would reopen following an agreement between the outlets’ management, Ugandan President Yoweri Musevani and Police Chief General Kale Kaihura. Onek said that the media outlets had agreed to "only publish or air stories which are properly sourced, verified and factual."

The media outlets also, "undertook to be sensitive to and not publish or air stories that can generate tensions, ethnic hatred, cause insecurity or disturb law and order," Onek added. In accordance with these agreements, the minister ordered police to end their occupation of The Daily Monitor's office and allow "normal business."

A court in Kampala will now hear a request from four Monitor Publications Limited journalists to cancel an order by police to produce an original copy of the controversial letter by Gen. Sejusa. Lawyers for The Daily Monitor also filed a complaint in court challenging the legality of the police search.