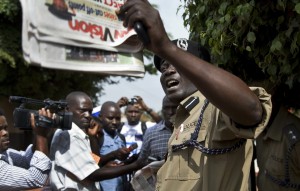 FILE - In this Tuesday, May 28, 2013 file photo, a Ugandan police officer holds up a newspaper as media and members of Uganda's Human Rights Network for Journalists protest outside the Daily Monitor newspaper head office, just before police fired tear gas to disperse the demonstration, in downtown Kampala, Uganda. Uganda's president Yoweri Museveni came to power in 1986 as an idealistic former Marxist rebel who denounced power-hungry African leaders but nearly three decades later he is now accused by some in the opposition, and others who served prominently under him, of becoming the type of politician he once despised. (AP Photo/Rebecca Vassie, File)