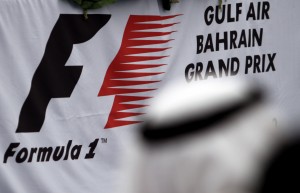 A Bahraini journalist wearing a white headscarf, seen back to camera, listens during a press conference Tuesday, Jan. 12, 2010, in Sakhir, Bahrain, about preparations for the run-up to the Formula 1 season opener that will be held March 12-14, 2010, in the Persian Gulf island nation. Officials for the Bahrain International Circuit used the press conference to begin a 60-day countdown to the inaugural race of the 60th anniversary F1 championship season. (AP Photo/Hasan Jamali)