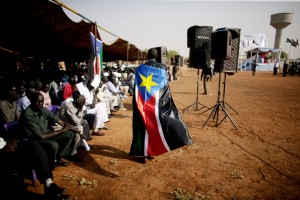 A Southern Sudanese man dons the flag of the Sudan People's Liberation Movement during the announcement of preliminary referendum results in Juba, southern Sudan, Sunday, Jan. 30, 2011. Referendum officials indicated that nearly 99 percent of all voters cast ballots in favor of southern independence. Southern Sudan will remained united with the north until the expiration of Comprehensive Peace Agreement in July 2011 at which point it is set to emerge as a separate state. (AP Photo/Pete Muller)