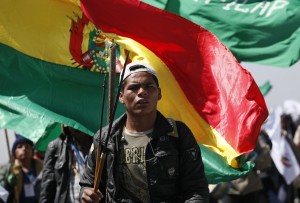 A protester holds a Bolivia's flag as he walks at La Cumbre, Bolivia, during a protest march to the country's capital Tuesday, Oct. 18, 2011. Indigenous and environmentalist groups, began an estimated 242-mile march from Trinidad to La Paz on Aug. 15 to protest a government planned highway that would cut through the Isiboro-Secure Indigenous Territory National Park, home to 15,000 indigenous people. After a police crackdown on marchers on Sept. 25, Morales announced the suspension of the highway, saying he will let voters in the affected region decide its fate. (AP Photo/Dolores Ochoa)