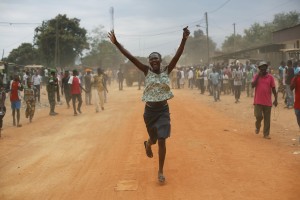 Christian residents jubilate as Seleka Muslim militias evacuate the Kasai camp in Bangui, Central African Republic, Tuesday, Jan. 28, 2014, to relocate and join other Selekas at the PK11 camp. The departure of the fighters was greeted with screams of joy from the crowd of hundreds that gathered to watch them leave for another camp in northern Bangui. We are free! This is our new year! they shouted. Seleka became deeply unpopular after they killed and tortured civilians after seizing power in March 2013. Their leader Michel Djotodia stepped down as president earlier this month and went into exile in Benin. (AP Photo/Jerome Delay)