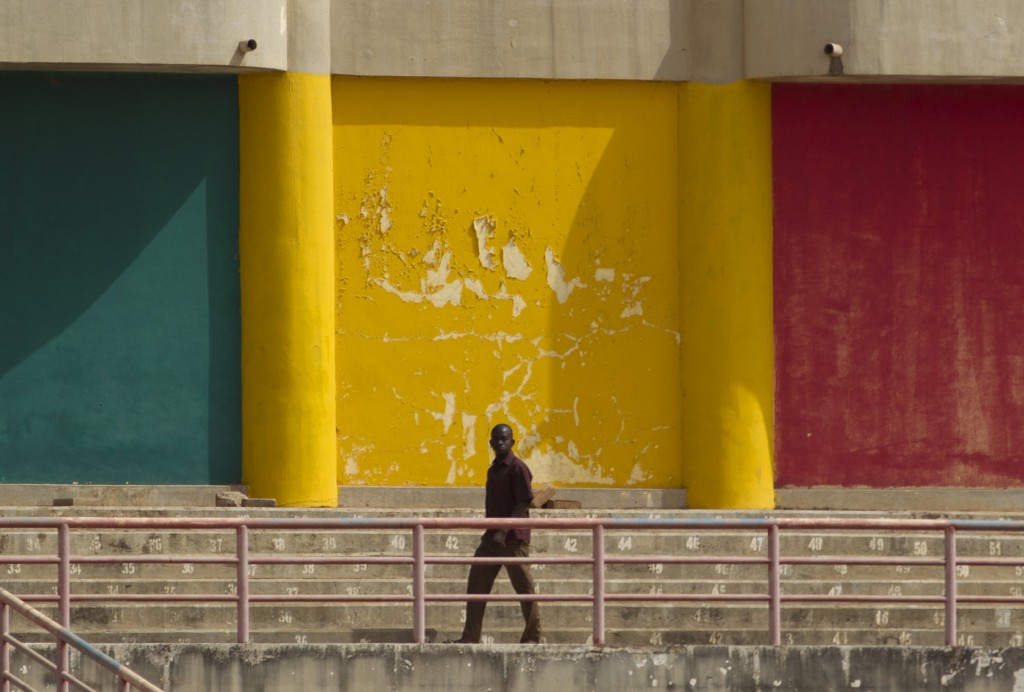 A man walks in front of a wall painted in the colors of the Malian flag, during a rally in support of the ruling military junta attended by roughly one thousand people in a stadium with a capacity of 50,000, in Bamako, Mali Saturday, March 31, 2012. Photo Credit: AP Photo/Rebecca Blackwell

Malian private news outlets initiated a media blackout after a journalist was detained by state-security forces for publishing an open letter from a soldier that criticized a military appointment made by the nation’s president.

The newspaper published the letter on the front page of its March 6 edition, and Ndaou was arrested that day by six state security officials shortly after publication. He is still being held in an unknown location without having ever been formally charged, according to Reporters Without Borders.

Daou was arrested in Bamako, the nation’s capital, said Le Républicain editor in chief Assane Koné, according to the Committee to Protect Journalists. Several journalists went to the headquarters of State Security, Mali’s intelligence agency, to ask about Daou, but officials denied that he was in custody.

The letter, written by a solider identified as Capt. Touré, a member of the Malian forces stationed in the northern city of Gao, criticized the appointment of Capt. Amadou Sanogo. Sonago was named General Secretary of the Military Committee for Monitoring the Reform of the Defence and Security Forces.

Sonago is an army officer who led a military coup in March 2012 against President Amadou Toumani Touré, according to AllAfrica.com.

President Dioncounda Traoré awarded Sonago financial support, according to the Committee to Protect Journalists. Sonago had stepped aside to allow Traoré’s government to take power three weeks after the coup, which allowed for Tuareg separatists and Al-Qaeda-linked militants to seize portions of the country during the instability, according to BBC News.

The author of the letter questioned why a former coup leader was being rewarded and said that if Traoré did not rescind “financial benefits” granted to Sonago, he and his troops would suspend military operations in the northern region of the country.

Le Républicain staff released a statement March 7 stating that they did not know the whereabouts of Ndaou and raised concerns about media-freedom violations.

“Le Républicain respects media ethics and will never yield to any kind of threats. Long live media-freedom in a democratic Mali.”

Reporters Without Borders has condemned the arrest.

A Malian soldiers tells journalists not to film the entrance of Gao, northern Mali, Friday Feb. 8, 2013, where a suicide bomber on a motorcycle killed himself attempting to blow up an army checkpoint. It was the first known time a suicide bomber has operated in Mali. Photo Credit: AP Photo/Jerome Delay

“Mali’s current problems do not justify intimidating journalists,” the organization said. “Arresting a journalist who draws attention to the dissension within the armed forces since last year’s coup just contributes to the instability. The press must be free to cover the most sensitive subjects in order to facilitate a return to stable democracy and respect for human rights, and we therefore call for Ndaou’s immediate release.”

CPJ also condemned the arrest. The committee reports that phone calls to Malian Minister of Communications Manga Dembélé were not returned.

"The arbitrary arrest of Boukary Daou is another example of Malian security agents acting outside the law in trying to harass journalists," CPJ Africa Advocacy Coordinator Mohamed Keita said. "We call on the government to immediately release Daou."

State Security agents have arrested at least three journalists since the March 2012 coup, according to CPJ. In May, editors Biram Fall and Saouti Labass Haidara were arrested in connection with critical articles. Editor Hadi Baby was arrested for eight days in June.

In the past year, at least 12 journalists have been detained and interrogated by security agents over articles critical of the government.

While on a state visit to Senegal, Traoré told journalists that the Malian army was incited by Daou to desert, according to Malian state broadcaster ORTM.

Traoré declared Daou would continue to be held in detention for going “beyond his press freedom rights,” according to Radio France Internationale (RFI).

“He was arrested so we can know more,” Traoré said. “And he will be freed if, and I mean if, there is nothing else besides what was written.”

In response to being unable to negotiate Daou’s release, private media outlets in Bamako, caused a media blackout on March 12, according to RFI.

Media outlets throughout the nation joined the following day, said Daouda Mariko, the president of Mali’s Union of Free Radio and Television Broadcasters. “We have total support,” Mariko told CPJ. “All newspapers in Mali are now observing the strike. And we have 98 percent compliance from all radio stations in the country.”

ORTM and Mali’s state-run L’Essor newspaper are the only news outlets in full operation, leaving Mali’s citizens with few choices in the middle of war and political strife.

The private media in Mali plan to continue the blackout until the government enters direct talks with the media to avoid attacks on journalists, according to CPJ. Le Républicain Editor in Chief Assane Koné told CPJ the decision is a costly one but is in defense of press freedom.

“Yes, we are losing a lot of revenue,” Koné said. “Journalism is our livelihood. But we are determined to go ahead with the strike because it is necessary for the survival of our profession.”