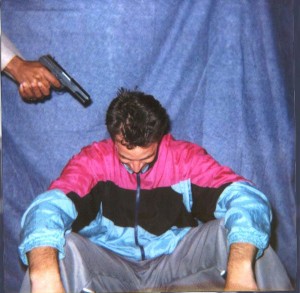 Wall Street Journal reporter Daniel Pearl is shown with a gun held to his head in this photo obtained Wednesday, Jan. 30, 2002. The Wall Street Journal called again Wednesday, for the group which claimed to have seized Pearl, missing in Pakistan since Jan. 23, to release him. An e-mail purportedly sent Wednesday by kidnappers holding Pearl threatened to kill him within 24 hours. There was no way to authenticate the e-mail, which was sent to both Western and Pakistani news organizations. (AP Photo)