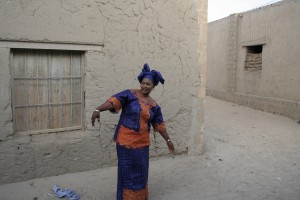 In this Sunday, Feb. 3, 2013 photo, Salaka Djicke tells how she was jailed and flogged after being caught having a relationship with a married man, in Timbuktu, Mali. Until they were chased out by the French last week, the Islamic extremists who controlled northern Mali since April applied a harsh brand of Shariah in the moderate Muslim region. Djicke was publicly whipped, and at least one other unmarried couple was executed by stoning. (AP Photo/Harouna Traore)