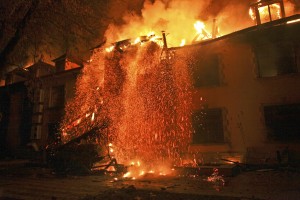 A hotel is on fire in Ismayilli, some 175 kilometers (110 miles) from the capital, Baku, Azerbaijan, Thursday, Jan. 24, 2013. A minor car accident in a town in central Azerbaijan spiraled into a showdown Thursday between residents and regional authorities, exposing underlying tensions and democratic shortcomings in the oil-rich former Soviet nation. Hundreds of angry demonstrators in Ismayilli surrounded a regional government building Thursday demanding the governor's resignation after a night of rioting in which a hotel and several cars were torched. (AP Photo/Aziz Karimov)