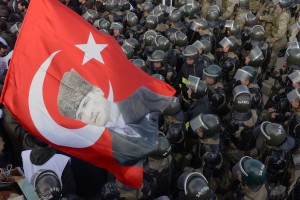 Turkish police try to push back hundreds of protesters trying to enter a courthouse where prosecutors were to deliver final arguments in a trial against nearly 300 people accused of plotting to overthrow the government, in Silivri near Istanbul. Turkey, Thursday, Dec. 13, 2012, Turkish media reported. Inside the courthouse, a panel of judges was forced to interrupt the trial three times over objections by defense lawyers and spectators shouting slogans in support of the defendants, who include prominent journalists, politicians, academics and retired generals, medias said. A protestor holds a flag with a photo of Turkey's founder Kemal Ataturk.(AP Photo)