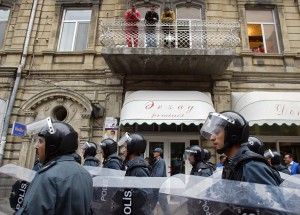 Azerbaijan riot policemen walk towards supporters of the Azerbaijani largest opposition alliance, Azadlig, before its unauthorized protest in Baku, Sunday, Oct. 9, 2005. Riot police forcibly dispersed opposition protesters trying to mount a rally in Azerbaijan's capital Sunday in defiance of a ban, beating some with truncheons and dragging several away. Tensions have mounted ahead of parliamentary elections next month, which the opposition in the Caspian Sea coast nation say are unlikely to be free and fair. (AP Photo/Sergey Ponomarev)