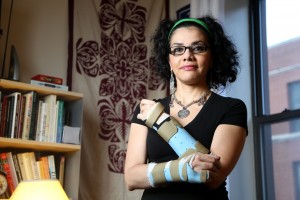 Prominent US-Egyptian journalist Mona Eltahawy has described a brutal sexual and physical assault that she says she suffered after being arrested by Egyptian riot police during a 12-hour ordeal inside Cairo's interior ministry.
Mona Eltahawy, Manhattan, New York, America - 22 Dec 2011
Eltahawy, who writes for publications including the Guardian and the Toronto Star, says she had bones broken in both wrists by security officials, who also grabbed her breasts and genitals. The award-winning Eltahawy, 44, told her story in a series of tweets at the time of her arrest and after her release. The incident came amid growing concern over arrests and assaults on journalists, both by the security forces and others.
(Rex Features via AP Images)