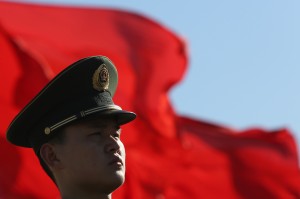 A Chinese paramilitary policeman stands guard on Tiananmen Square while sessions of the National People's Congress and the Chinese People's Political Consultative Conference are held at the Great Hall of the People in Beijing Monday, March 4, 2013. In a rare move, China on Monday declined to reveal its defense budget request for 2013. It has been customarily that the country announces its defense spending plan for a new year at a press conference that is held a day before the opening of an annual session of the National People's Congress, China's parliament. (AP Photo/Kin Cheung)