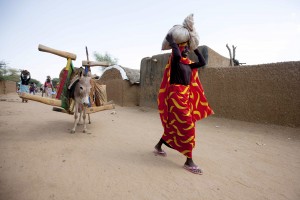 In this Monday, Aug. 27, 2012 photo released by the United Nations-African Union Mission in Darfur (UNAMID), a woman carries her belongings with the help of a donkey on her way back home in Kassab camp for Internally Displaced Persons (IDP). Civilians are beginning to return to their camps for the internally displaced following several weeks of unrest that began with the killing of a local official and his driver by a group of armed men. (AP Photo/Albert González Farran, UNAMID)